Idle animations are typically any animation that plays without user input, the way an avatar shifts around as it sits for example, the way a tail might swish from side to side, or a merry-go-round turning, ready for the avatar to catch a spot, any animation in fact triggered to automatically play, and/or loop, when an avatar or product loads into the scene. 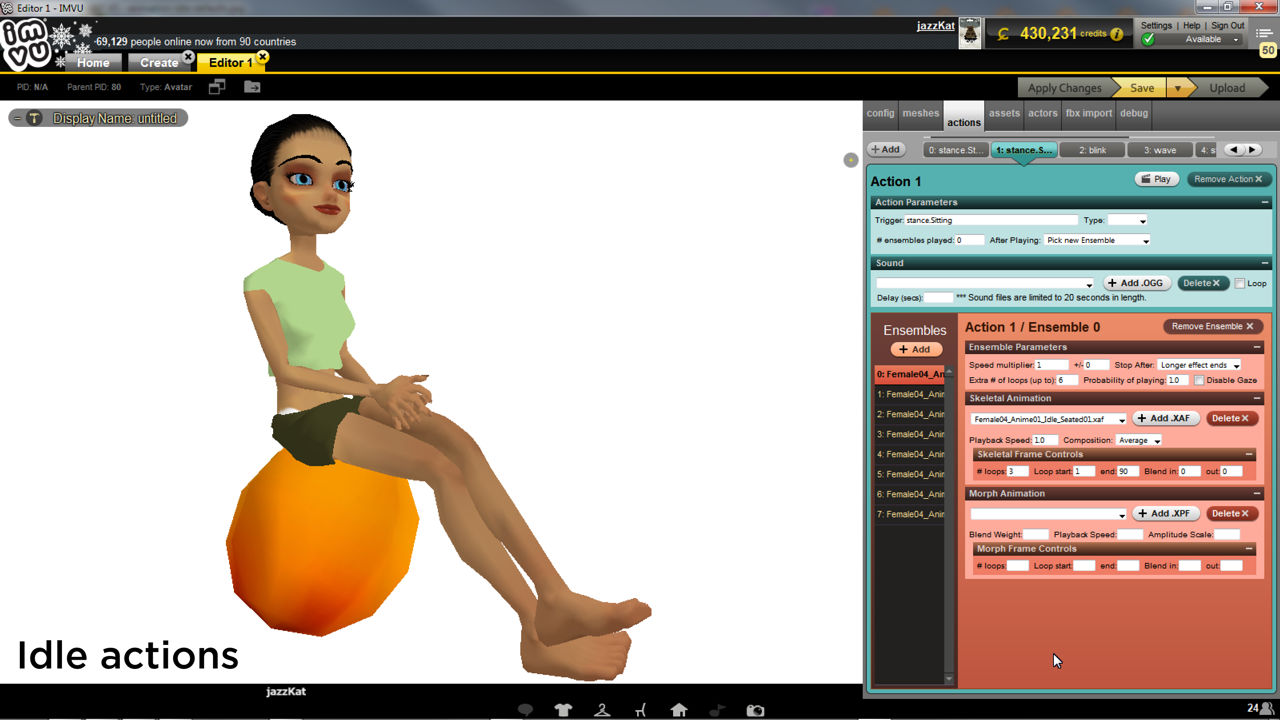 Depending on the type of product each can have a different collections of idle animation, sequences that play by default when the product loads, the avatar cycling through a set of sitting or standing actions for example, or a furniture item spinning around.

Although any animation can be set to auto-play when an item or avatar loads, which makes it an idle animation, it’s best to make sure sequences loop otherwise the item may revert to a fixed position or remain in a static pose once the animation plays through and finishes. To create an idle action an animated sequence first needs to be generated in Blender which is then imported into IMVU and assembled as a product. For items that include looped animation particular attention should be played to the loop and trigger characteristics of the project in actions, the values set for #ensembles played and # loops (a fixed number, i.e. 5, or 0 for looping without end), and whatever is set as the Trigger, a word or phrase or stance.Idle. For idle sequences this latter aspect, stance.Idle, is the single element that determines whether an action is idle or not.

Looped or cycling animations need to be set up in Blender to repeat, for 3D this is the equivalent of a texturing tiling across a surface without there being any noticeable edges or seams as it repeats across a surface.

There are three different types of generic idle animation that will auto-play when a product loads; stance.Idle, stance.Sitting and stance.Standing; for none-avatar based products stance.Idle auto-triggers the action, cycling through one or more sequences depending on how the action is defined, stance.Sitting and stance.Standing auto-trigger a set of default animations specific to the avatar and what they do whilst sitting down or standing up. These are the defaults.

By default the idle actions for the avatar, stance.Sitting and stance.Standing, contain a number of animated sequences each set up to be randomly selected and played from a list of ensembles determined by different properties that can be assigned.

An idle action comprises two parts, the Action section where the basic properties of the action are set (number of times the action loops and what it affects), and Ensembles section, the area where properties specific to a particular sequences are established (number of frames, playback speed etc.). This division provides greater flexibility when creating idle actions because it allows for individual actions to reference multiple animations, watching the seated avatar for example, stance.Idle is the active action, whereas the different poses stuck are individual animations – one action, multiple animations;

In practice this means an action can play a single animation and just loop it to infinity and beyond, or several separate animations can be set up to loop a limited number of times, each then taking turns to play depending on the actions overall behaviour (select same, list or random). 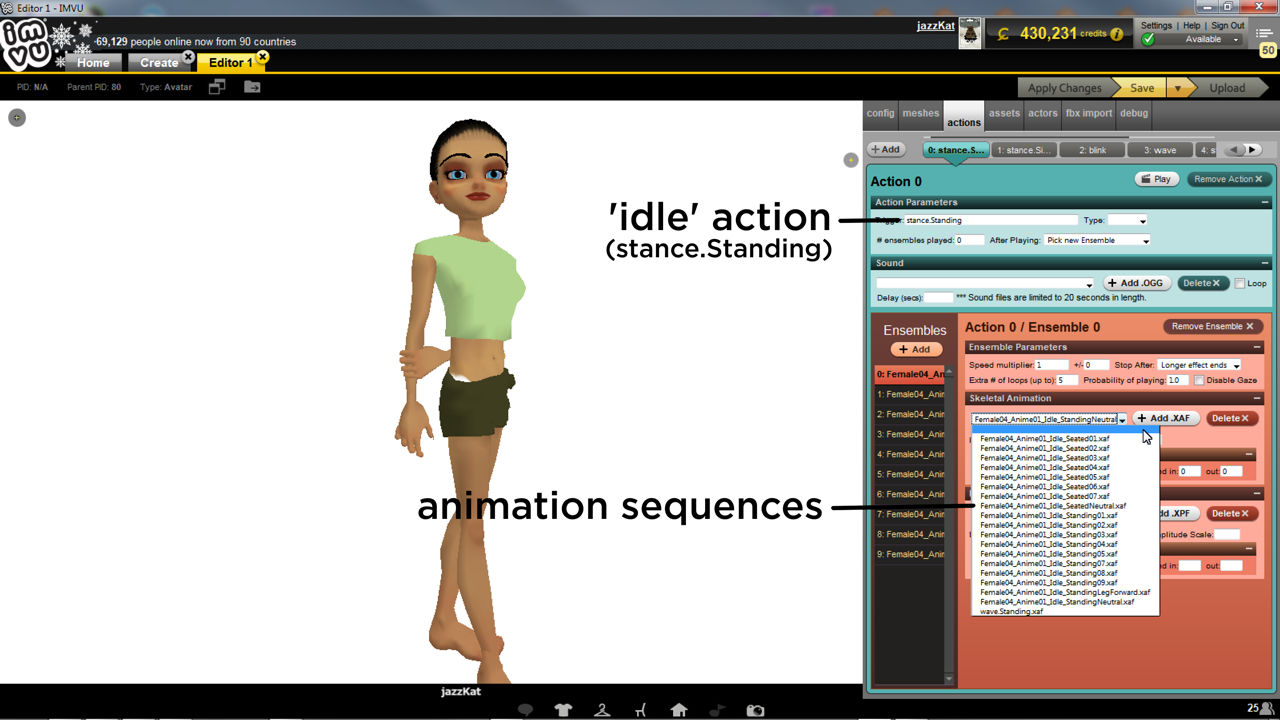 Each Ensemble holds a single animation so the overall Action needs several if the avatar (in this instance) is to perform different actions.

To set up an action with a single looped animation, derive from a product and import the animation files that’s needed. Create an Action in the actions tab and set up the appropriate properties to make the sequence loop, then for the Trigger add stance.Idle for furniture, rooms, accessories and pet products – this triggers the looped animation on load, or stance.Sitting or stance.Standing for avatar poses (and also pets that react to what the avatar does) – this triggers the animation when the avatar (or pet) sits or stands.

When creating avatar idle animation be sure to derive from the Empty Mood product, 10945930, which is blank, and not the avatar, 80 (or 191), which is not. Keep in mind also that avatar animation only over-ride the defaults when worn. 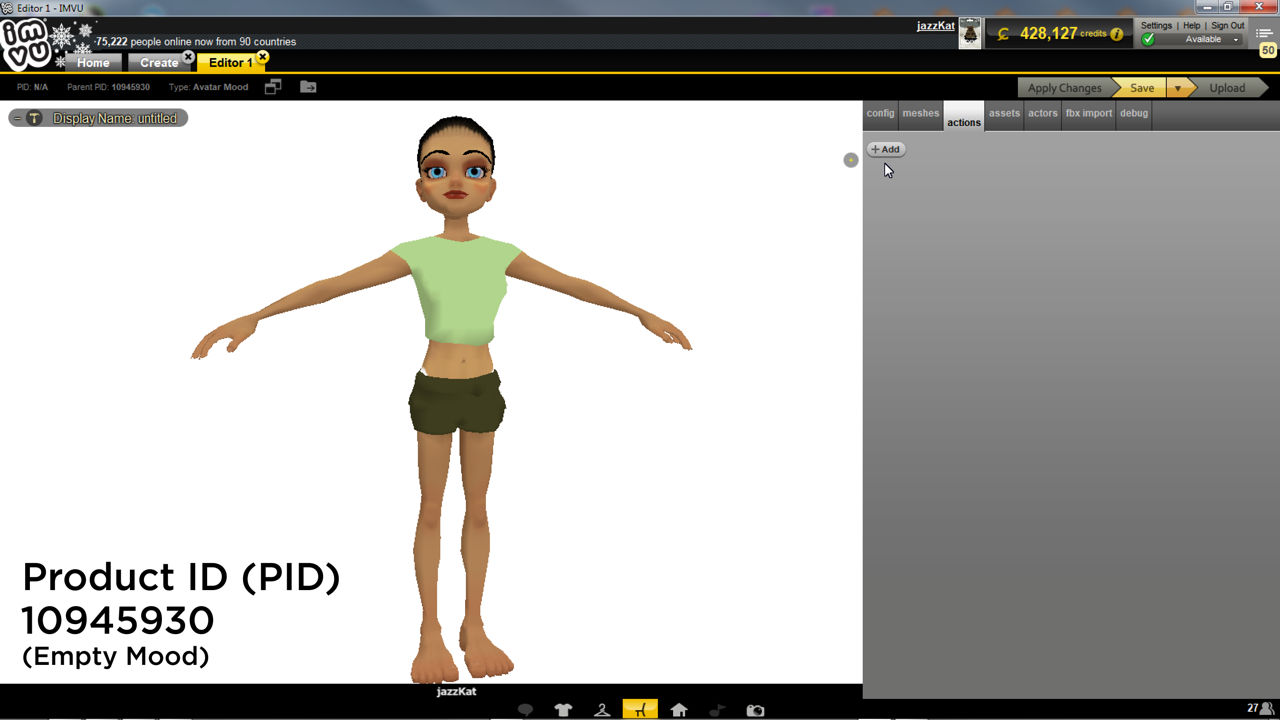 When creating actions for the avatar, derive from the Empty Mood product which is stripped of the default idle animations – this reduces the risk of conflicts loading an action over the top of the defaults.

Setting up a single sequence can be done by loading in an FBX or XRF file and setting the appropriate options, stance.Idle to trigger the action by default.

For an action with two or more animations available for idle set the initial action up per single animation action above then in the Ensembles section click the + Add button. A new ensemble instance will appear. Set up this new ensembles properties, the number of loops, the start and end frames and so on. Repeat as needed to include extra animations, one per ensemble Once all the ensembles are set up the action needs to be changed based on the behaviour expected. In After Playing select Pick new Ensemble if the avatar or item is to randomly select an animation to play; Pick same Ensemble if the same sequence plays regardless of any others, and Cycle through Ensembles to play each animation in sequence as they are listed. Depending on the animation themselves it may also be necessarily to set Composition to Average or replace depending on whether each sequence plays through strictly or is partially merged with sequences before and after play though. 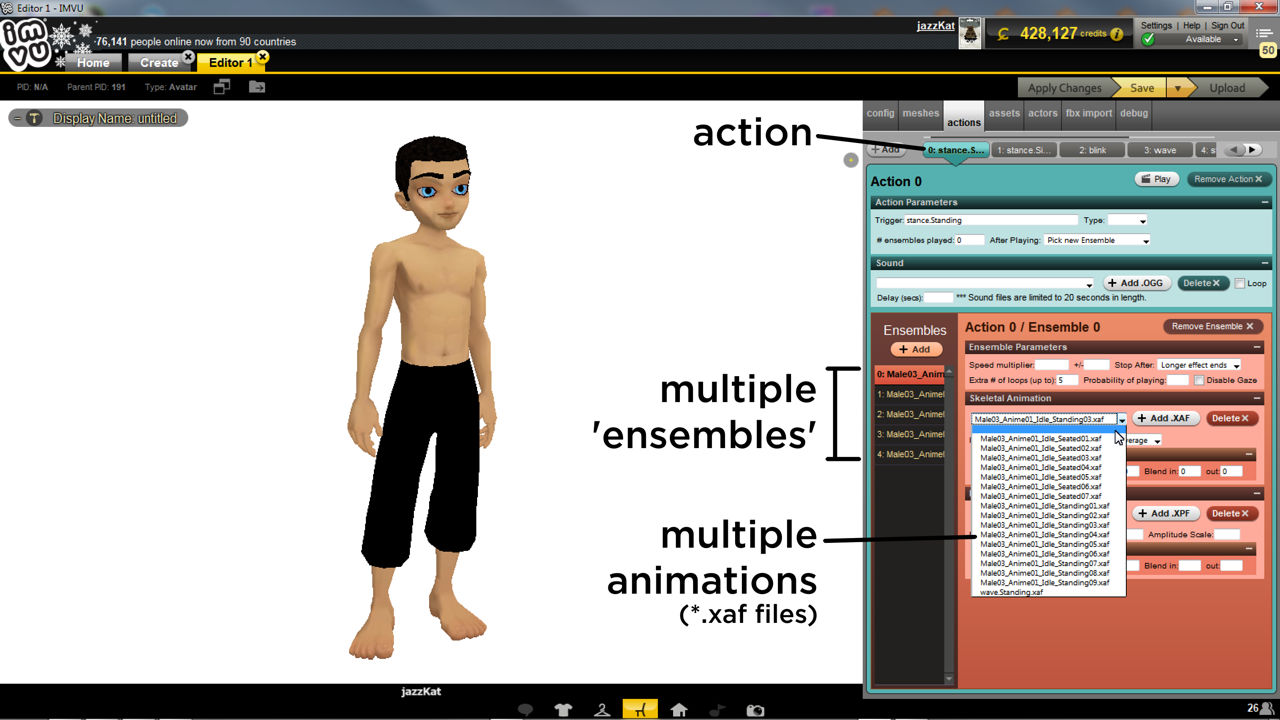 Setting up an idle action that selects from a set of animations is the same as for a single animation, the difference being simply the number of ensembles needed, one per animation (with appropriate properties set).

For actions generally the way they play when active can be strict or relaxed, i.e. the sequence will play exactly as it is for its entire duration, or it can be blended or partially merge with whatever sequence plays before or after. The two settings that alter this behaviour are Composition and Blend. To play an animation strictly set Composition to Replace which forces IMVU to play the selected animation as-is (which ignores any Blend settings). To merge between animations, before and after, set Composition to Average then provide a Blend in and out value, the number of frames over which a blend between two animations will occur, e.g. 5 in and 7 out would blend 5 frames at start of the sequence, 7 at the end.

Blending between animations can make animation appear different than expected depending on the value used, if too large the difference can effectively act to nullify the sequences played resulting in more muted animation behaviour.

Animations can be played in a strict or partially merged sense, i.e. strict plays the sequence as it appears, merging will blend between sequences by a set number of frames using Blend in/out and Composition.
Tagged: AnimationAnimationsBlenderMeshing