Rooms and Working with the Camera

The view displayed to the User when a room initially opens is determined by a special camera object that’s usually positioned to highlight a particular aspect of a scene that will also generally include at least one avatar spot as a focal point. This set up, the cameras point of view and the avatar focal point, acts as a start or reset position always shown as the initial scene or establishing shot (in filmic terms) when the room loads or the User enters it.

For more information on adding a camera to a room click here. 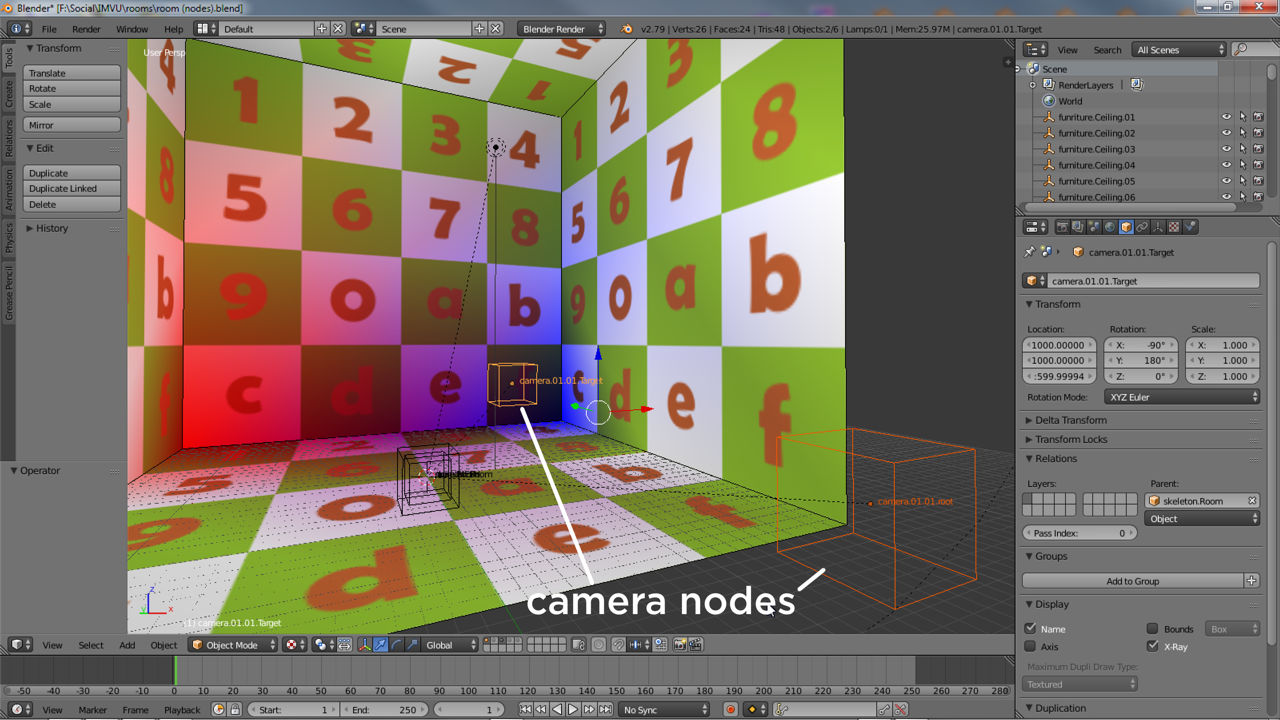 To include a camera with a room two nodes are needed that are in-turn parented to skeleton.Room, camera.01.01.root and camera.01.01.Target, the former (root) looks at the latter (target).

The cameras in IMVU has an in-built auto head zoom behaviour that means it will automatically align to the avatars head when a room initially loads and/or the scene is manipulated by the user. Although this is programmed into IMVU itself, to aid proper functionality, when positioning the camera node pairing in Blender, camera.01.01.root.Target should be placed approximately where the start-spot avatars Head bone is located, with both camera nodes then being suitably aligned to compensate or take advantage of this.

IMVU assumes the camera is pointing at an avatar when a room loads so will auto-head-zoom/snap to focus on the nearest head making it appear to jump or move unexpectedly when the scene is initially manipulated. 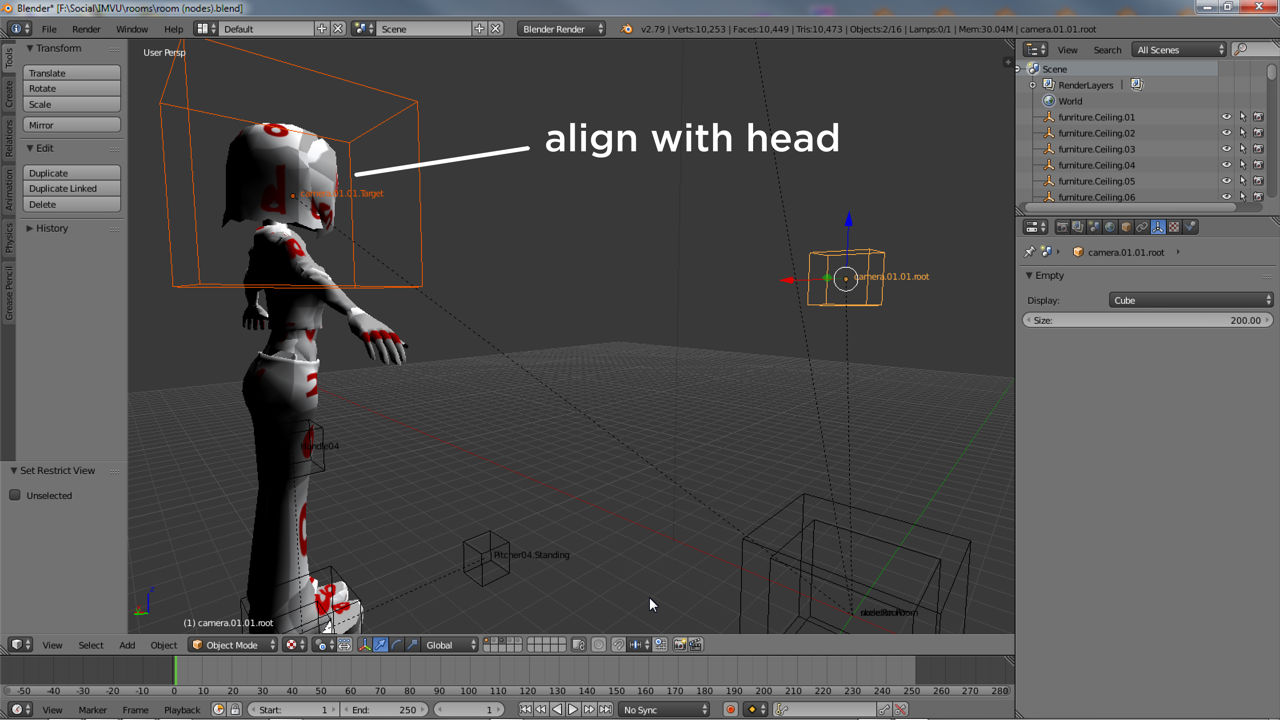 The point of view seen by the camera when a room first loads should generally be aimed the head of the avatar occupying seat01 and adjust accordingly to accommodate the height difference between a seated or standing avatar.

For Blender creators, because the camera is simply a node pair its not possible to see what it might otherwise be looking at. Although this is possible using an actual Camera object in Blender, because these don’t work for IMVU, to see what the camera might be looking at camera.01.01.root can be selected and then focused on using View » View Selected (NumPad 1). This snaps the 3D Views viewport camera to the selected entity, around which it can be manipulated so its looking at camera.01.01.root.Target, giving an approximation of the scene as the camera and User will see it in IMVU. 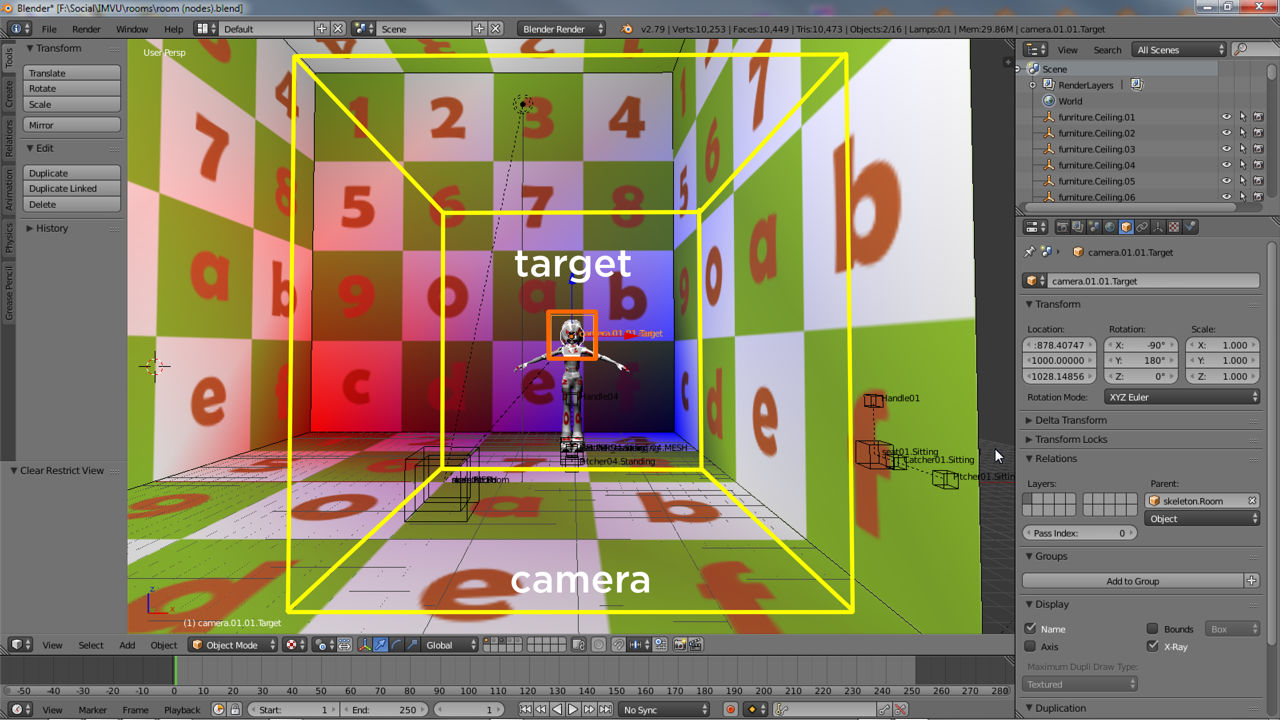 Although rooms made in Blender cannot utilise an actual Camera entity object, the view seen can still be assessed for framing, how the scene, avatars, objects and camera align, selecting camera.01.01.root then using View » View Selected.

Like other node based objects the camera node pairing can be animated, which can then be triggered as for furniture, accessories and other items, that is to animate on the items loading into IMVU, or using a trigger word or phrase. To do this, like other types of animated element, the camera nodes will need to be paired to a control node which is in-turn animated and parented to skeleton.Room. Once set up, export as normal for animated items – select everything to be included and ensure NLA Strips and Force Start/End Keying are disabled in Animation during FBX export.

Due to differences between 3DS Max and Blender the animated cameras may not behave exactly as expected, they may not track a path properly nor override IMVU’s auto-head-lock feature that automatically forces the camera to focus on avatar heads when the scene is manipulated. 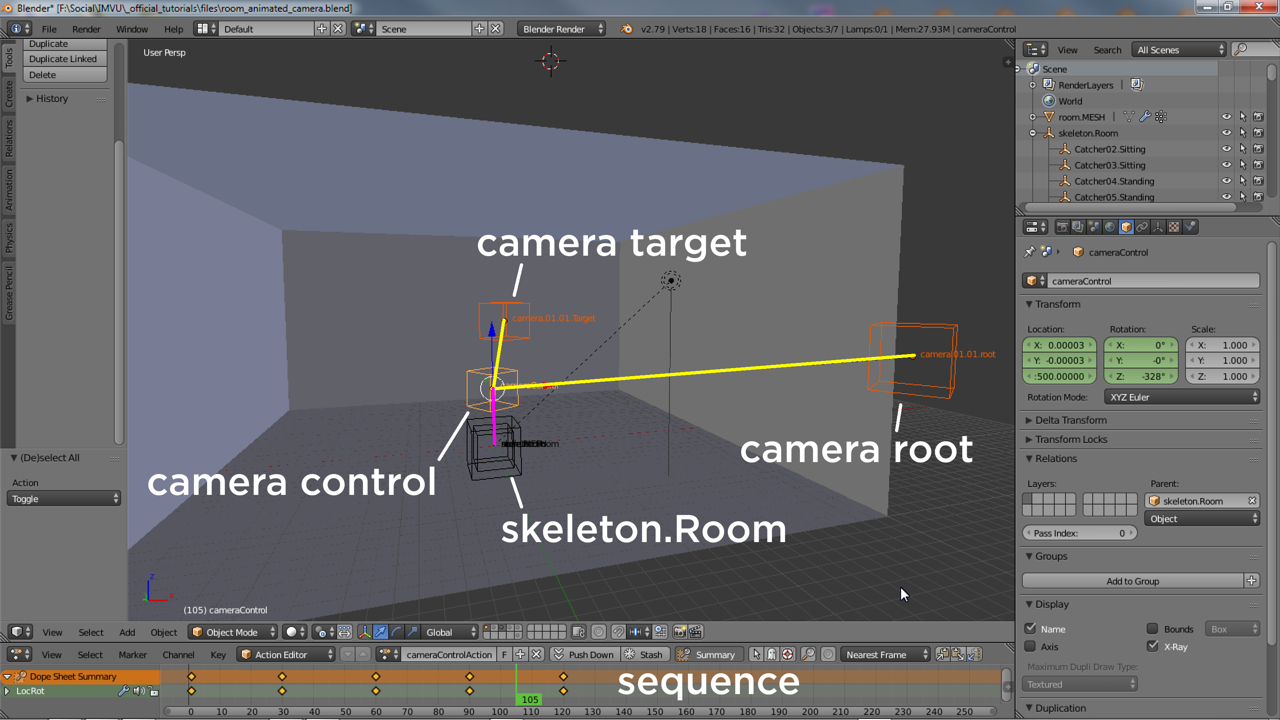 Cameras can be animated in Blender by linked the camera nodes to a control node that will carry the actual animation (avoid animating the camera node directly) – parent camera to control, then control to skeleton.Room.