In this tutorial you’ll learn about how avatar poses are made, and the basics of animated avatar actions. While this tutorial specifically references Blender, many of these steps will apply in other 3D software applications. [Download Blender FREE here.]

The file used to make IMVU avatar related poses in Blender is called the Avatar Pose file. It can be used to make statue or static poses – poses in which the avatar appears frozen or stuck, unmoving. And animated poses – poses which have the avatar appear to perform an action, move, gesture or articulate in some way. Both static poses and animated actions are created the same way.

This information applies to both Female03 and Male04 avatars 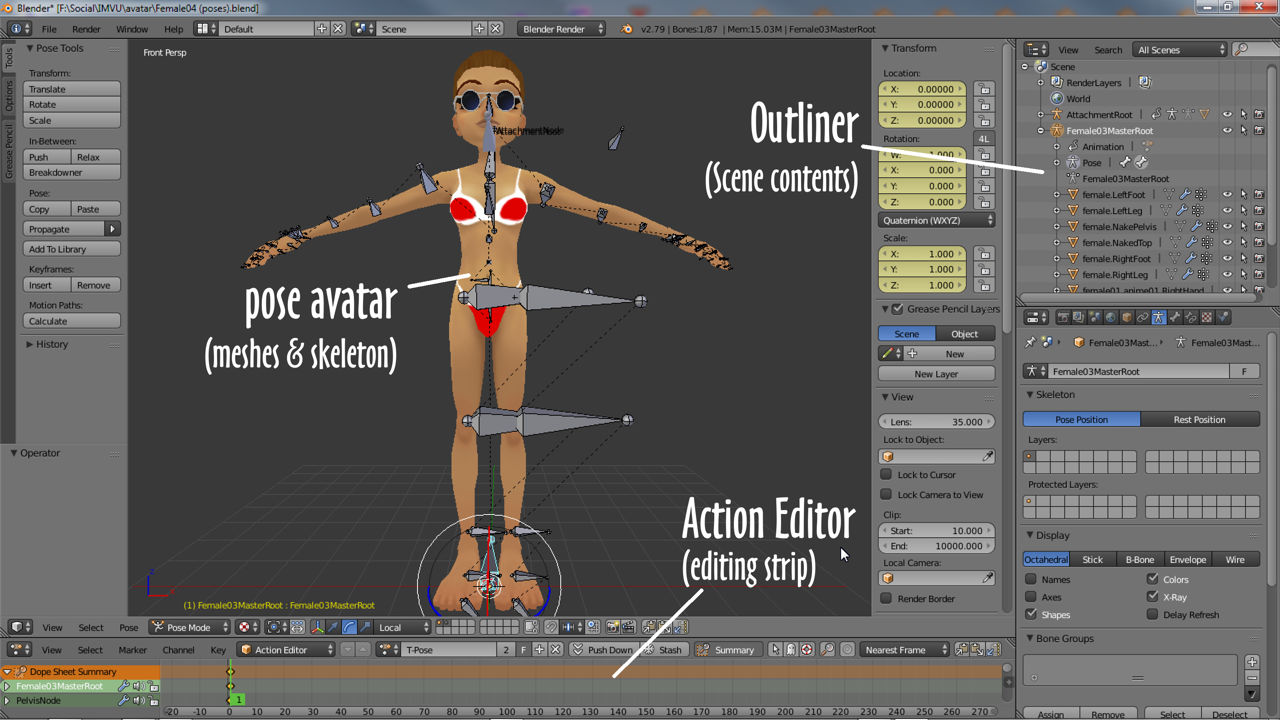 When loading the IMVU Pose file into Blender the screen may look similar to the above with the pose-able avatar occupying most of the main 3D View. Below is the Action Editor where the sequence associated with the pose is edited and manipulated.

How the Pose Avatar File Works:

Avatars in IMVU are essentially comprised from a set of meshes, visible to the User, and an underlying skeletal structure, invisible to the User. This skeleton controls the meshes and how they move and behave. Without this, avatars won’t do anything beyond standing in the same spot with their arms out-stretched. 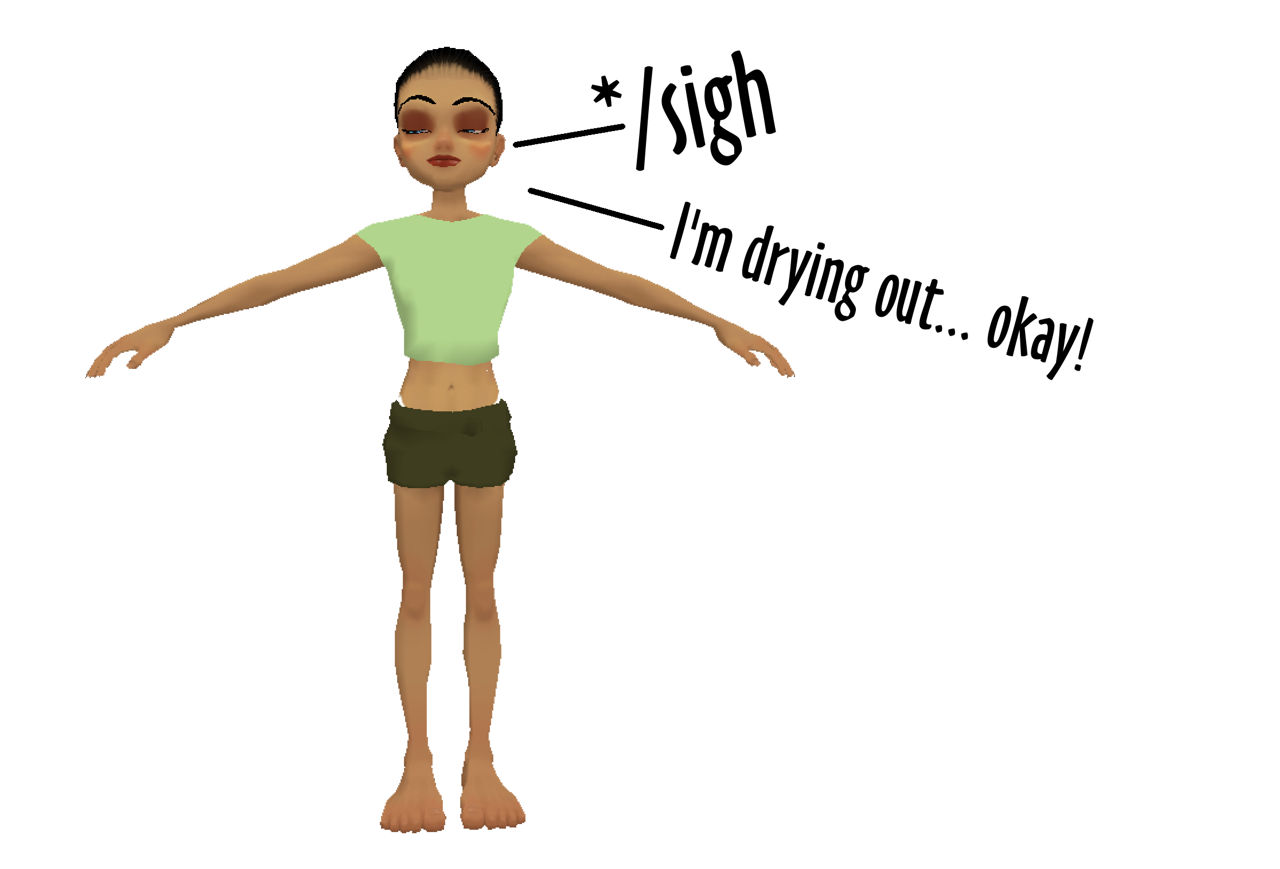 I’m drying out OK!. If the Blender Pose file isn’t changed, upon import into IMVU the avatar will likely stand with its arms outstretched (commonly known as the “T” pose).

The way this all works is as follows; each mesh is uniquely identified and positioned relative to a particular section or element of the avatar, e.g. a separate mesh for ‘foot’, ‘hand’, ‘hips’ and so on. Being specific means they can be controlled by different bones within the skeleton corresponding to each mesh – ‘foot’ bones control ‘foot’ meshes and so on (a left/right pairing for either foot in this instance).

Help with Weight Painting and Vertex Groups can be found here 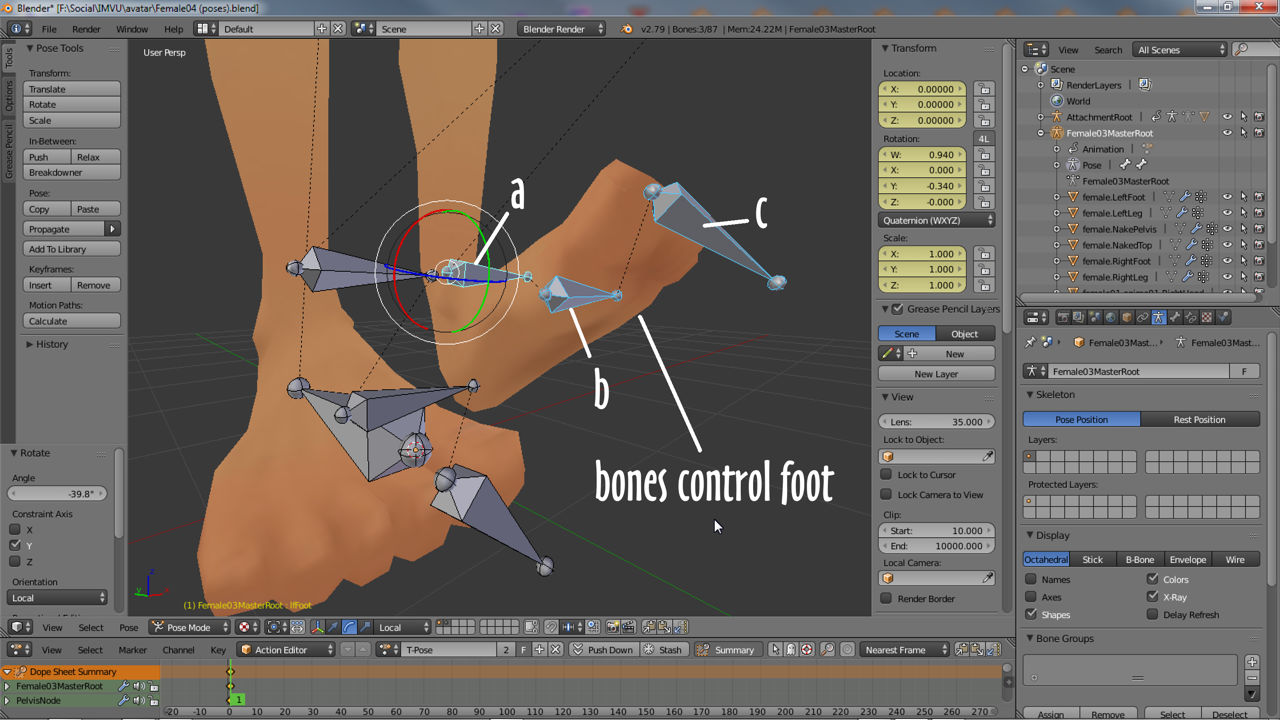 My, what big feet you have!. Bones control how avatar meshes deform and articulate, each linked to a set of bones through vertex groups – a/ankle, b/foot, c/toes

As each mesh is controlled by different bone, together the entire avatar can be manipulated and posed simply by moving and articulating the skeleton. And this is essentially how avatar poses and animated actions are created; the skeleton controls the avatars meshes through the manipulation of individual bones to create a specific pose which is marked to the timeline as a sequence. 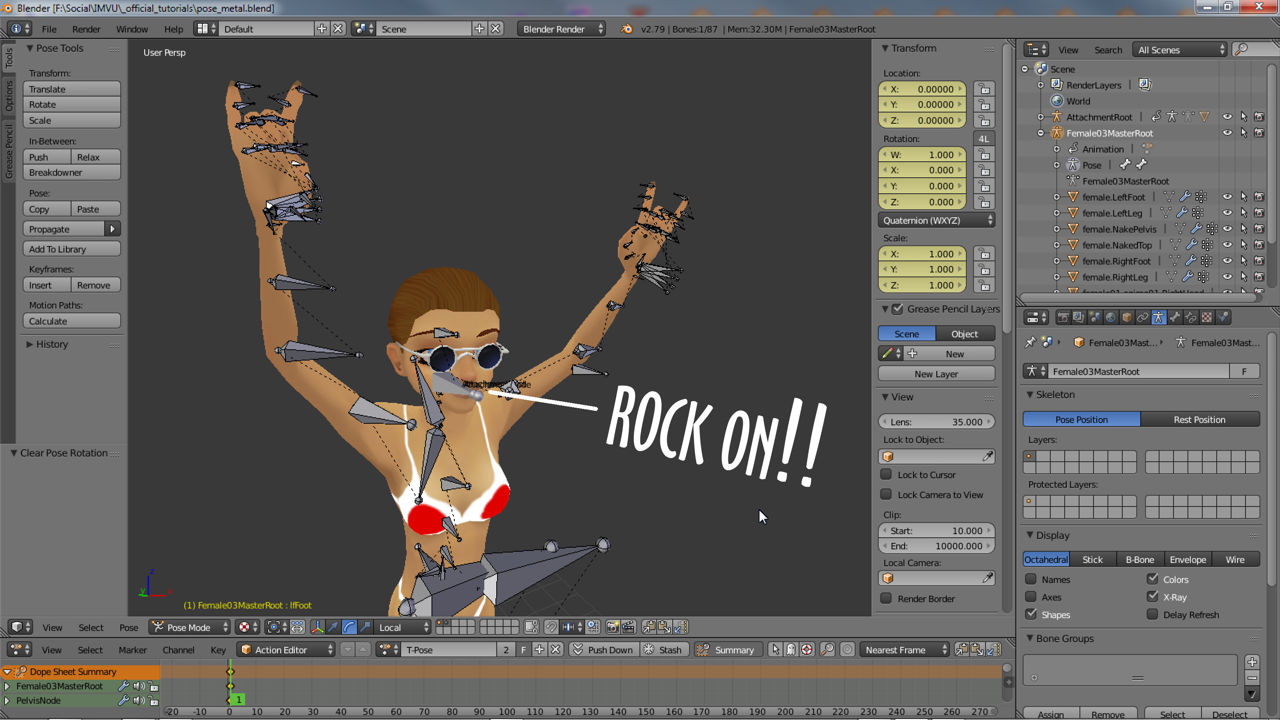 ROCK ON!!!. Using the skeleton (called an Armature in Blender) the avatars meshes can be manipulated to create all sorts of poses, from simple ‘rock on’ arms only to full body yoga poses, imagination being the only limit

As mentioned above; the avatar is simply a set of meshes and a skeleton linked together using vertex groups. The meshes are as follows (assuming MCG as explained in the Virtual Goods Policy); 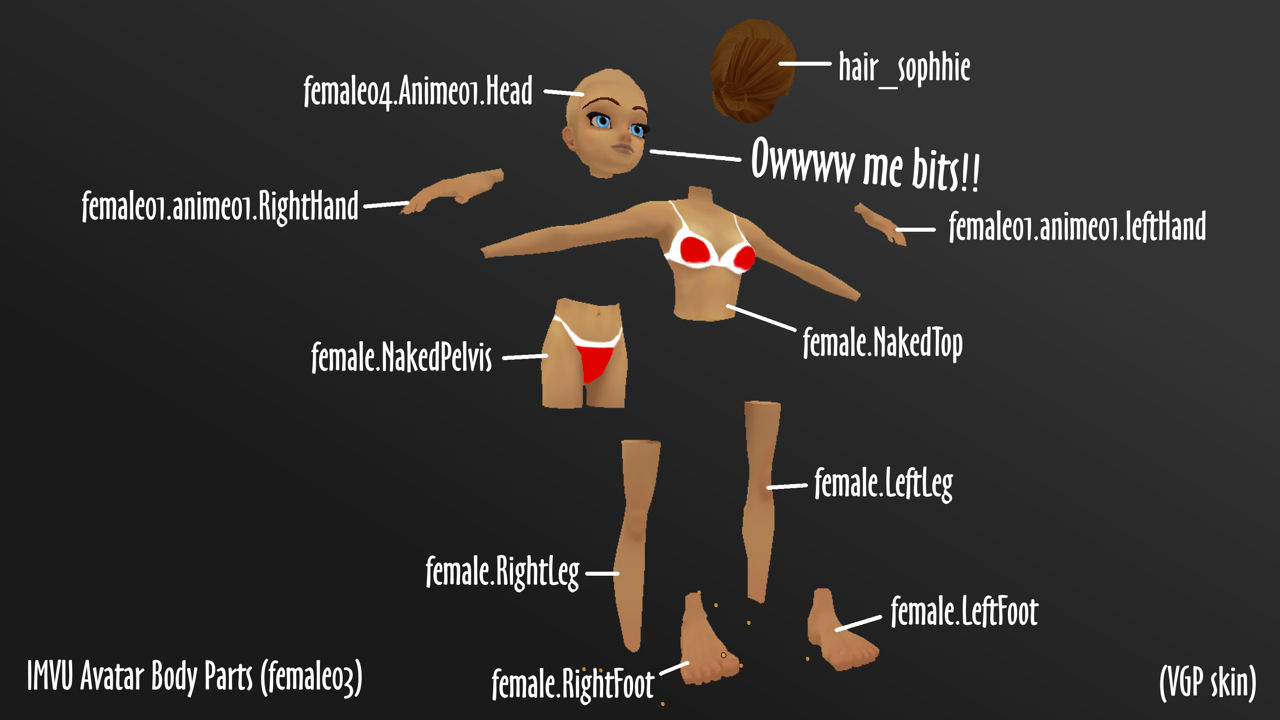 Oww me bits!!. The Pose avatar includes a set of default meshes so the articulation of the skeleton can be seen and more easily visualized.

The skeleton, or Armature in Blender, that controls the avatar comprises 86 individual bones (87 including zHead, which is typically used to locate Pets ), they are (blue=neutral, gold=left side, green=right side); 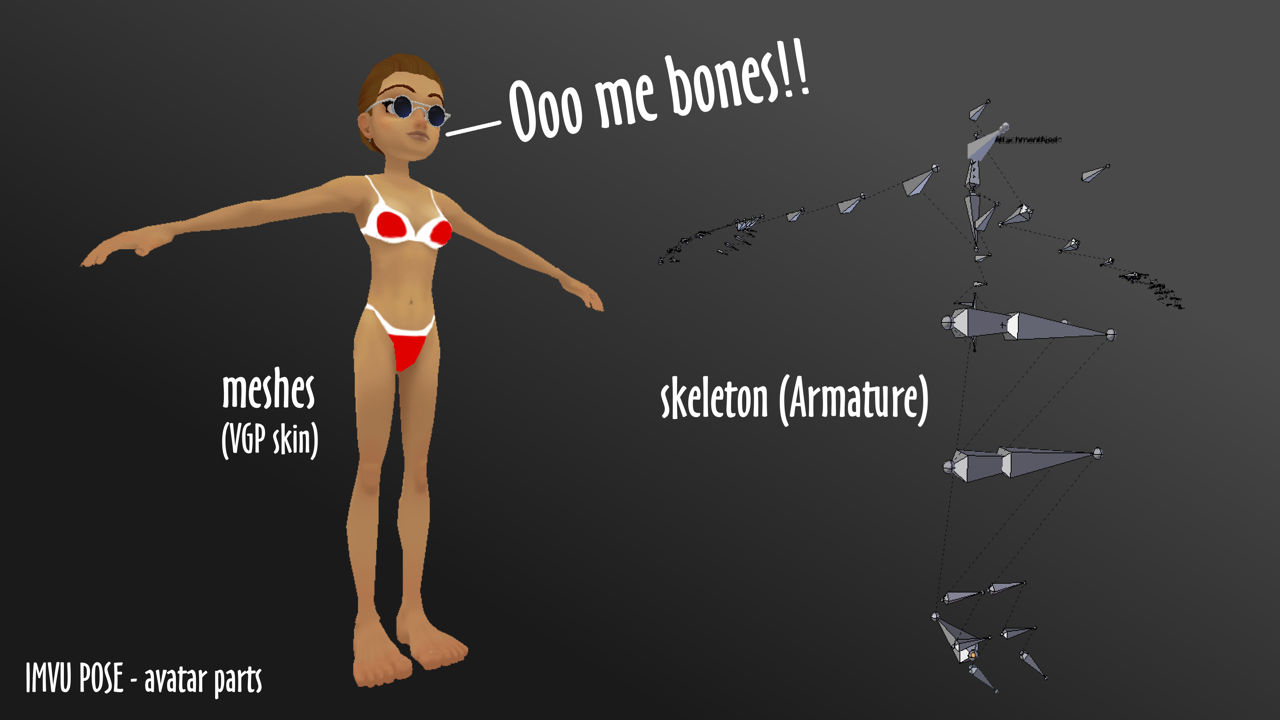 Ooo so that what me bones look like!. Each part of the avatar, the individual mesh sections, is controlled by an underlying skeletal structures that’s invisible to the end user. In Blender the skeleton, or Armature as its called, is visible to help make the pose creation process easier.

Although most poses and animations are made by manipulating the avatar in the main 3D View (the big window where the avatar stands), the animation or static pose belongs to an overall sequence. This is where the Action Editor comes into play, it being used to collate, edit and manage different poses as might be part of a longer avatar action – once a sequence has been created the frames it contains are exported and used by IMVU to replicate the action . 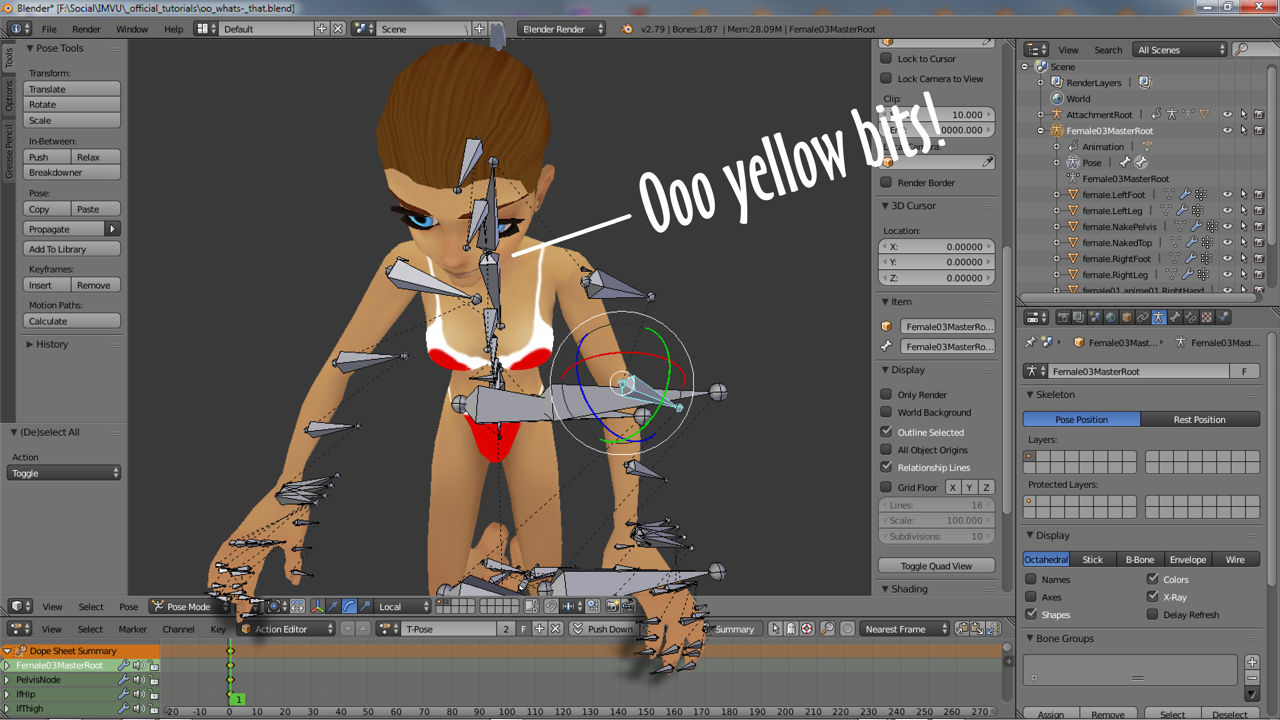 Ooo yellow bits! The Action Editor is where most of the pose or animation as a sequence is edited and managed prior to export