To ensure rooms and furniture products are correctly sized a standing and seated avatar dummy or helper is included in the Blender room starter file and furniture starter file. Each helper is also accompanied by a set of ‘seat’ or ‘pose spot’ nodes to aid in the addition and positioning of IMVU avatars with respect to the item being used, room or furniture.

Download the avatar Helpers in the Furniture Starter and Room Starter files.
For more on the Blender avatar files click here and here. 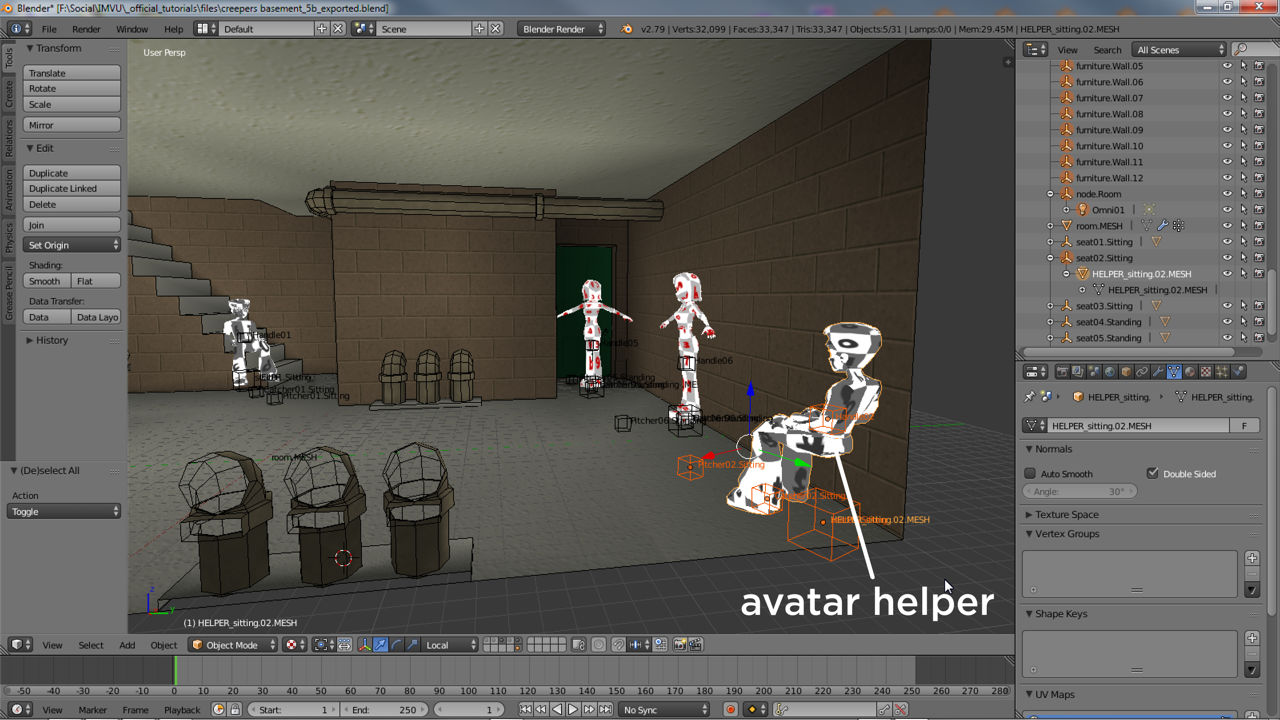 Avatar helpers, or dummies, as mesh only versions of the avatar room and furniture makers can use to assist in making sure the products they make are correctly scaled/sized relative to the avatar.

The avatar helpers are static versions of the female and male avatars frozen in the default standing (female) and sitting (male) poses. Because their purpose is to act as size, scale and positional guides for furniture and room makers they do not animate. The poses they strike not only aid positioning the avatars and accompanying seat node structure, but also the amount of space each needs when standing or sitting in IMVU during use. The standing avatar for example strikes a T-pose, arms out to the side, that might result in hands or wrists clipping if placed too close to a wall, or buried inside a furniture item or another avatar. In essence the total area occupied by the avatars poses form a bounding-box, a volume of space the avatar needs to function properly in IMVU ( if the aforementioned issues are to be avoided).

An objects volume can be visualised in Blender activating Bound in the Display subsection of Object Properties, then selecting Box from the Object boundary display type selector. 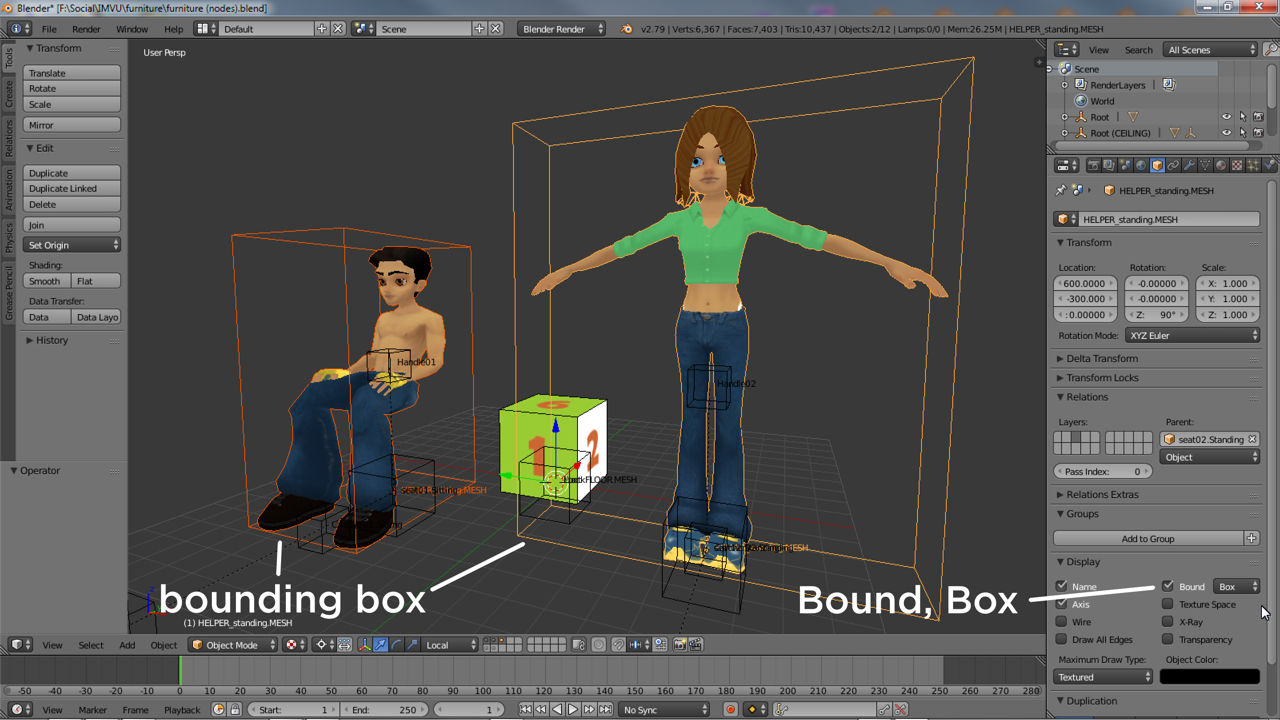 The bounding box is the area or volume the avatar ordinarily occupies by default and can be visualised in Blender by enabling Bound » Box, that can then be used as an easy to use guide when setting avatar placement to avoid clipping or burying the avatar in furniture or walls.

The avatar helpers for both rooms and furniture include a dummy mesh for each sitting and standing pose accompanied by a set of corresponding nodes for seat or avatar spot placements within an item, needed for IMVU.

Projects should always be started using the room [link to file] and/or furniture [link to file] starter files to ensure products fit the avatar and generally intended use. A couch for example might be made too small and need adjusting to fit, a process aided placing the furniture mesh under the seated avatar to reveal how much the mesh then needs to be modified to properly accommodate the seated position whilst the base of the couch sits on the ground plain. Similarly for rooms, for example using the standing avatar helper the height of a doorway, or steps of a stairway, can be better assessed and changed so they appear correctly positioned and proportioned relative to the avatar. In each case without the avatar helpers making products correctly fit the in-game avatar can be time-consuming, involving as it does a lot of trail and error.

For more on using the avatar helpers click here. 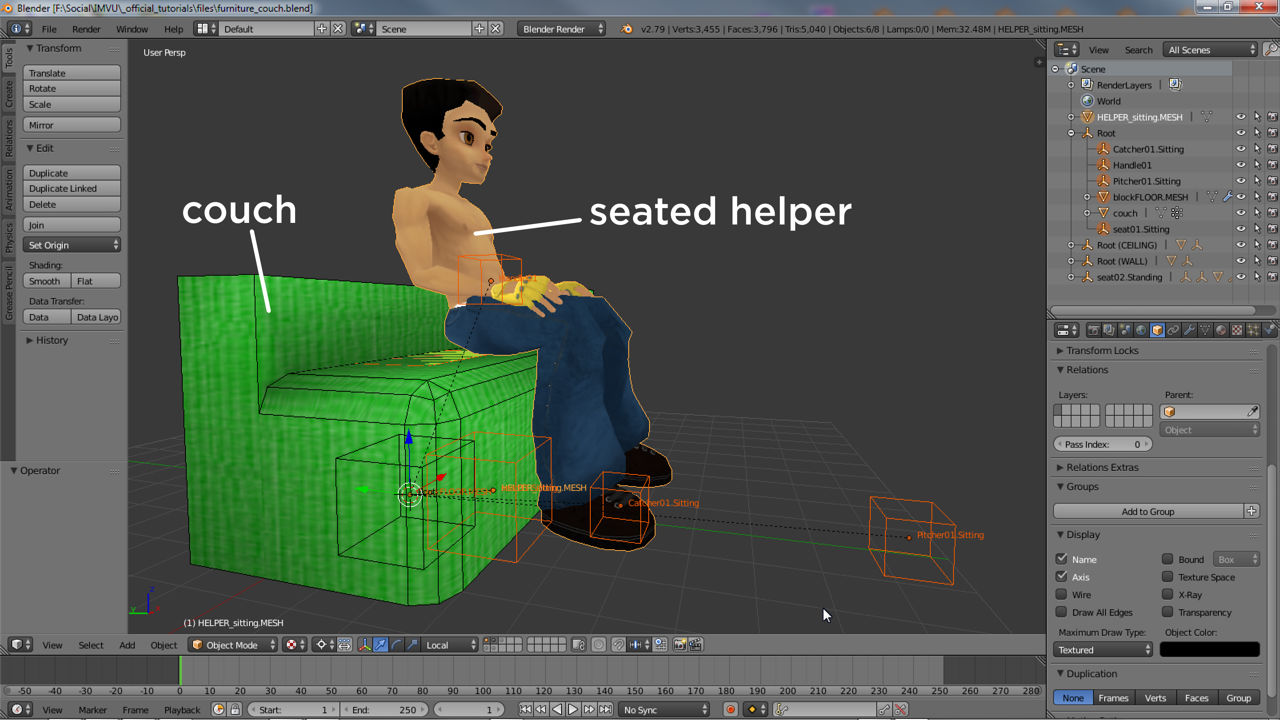 Avatar helpers are typically used for two reasons; to place or position avatar in relation to a room or item, and to make sure products are correctly sized, for example the seated avatar being used to position a seat node and ensure the couch is the right size.

The Avatar helpers accompanying the room and furniture starter files generally do not need to be modified in any way beyond duplication, where several seats or avatar spots might be require, or to position or rotate them into place. As each set is grouped for ease of use, to move simply right-click the large seat[n] node and use the transform widget to position or rotate into place.

Do not scale objects as its not supported by IMVU.


For consistency the avatar helpers accompanying the room and furniture starter files are set up so they can be manipulated using the large seat[n] node included as part of each group (see above). 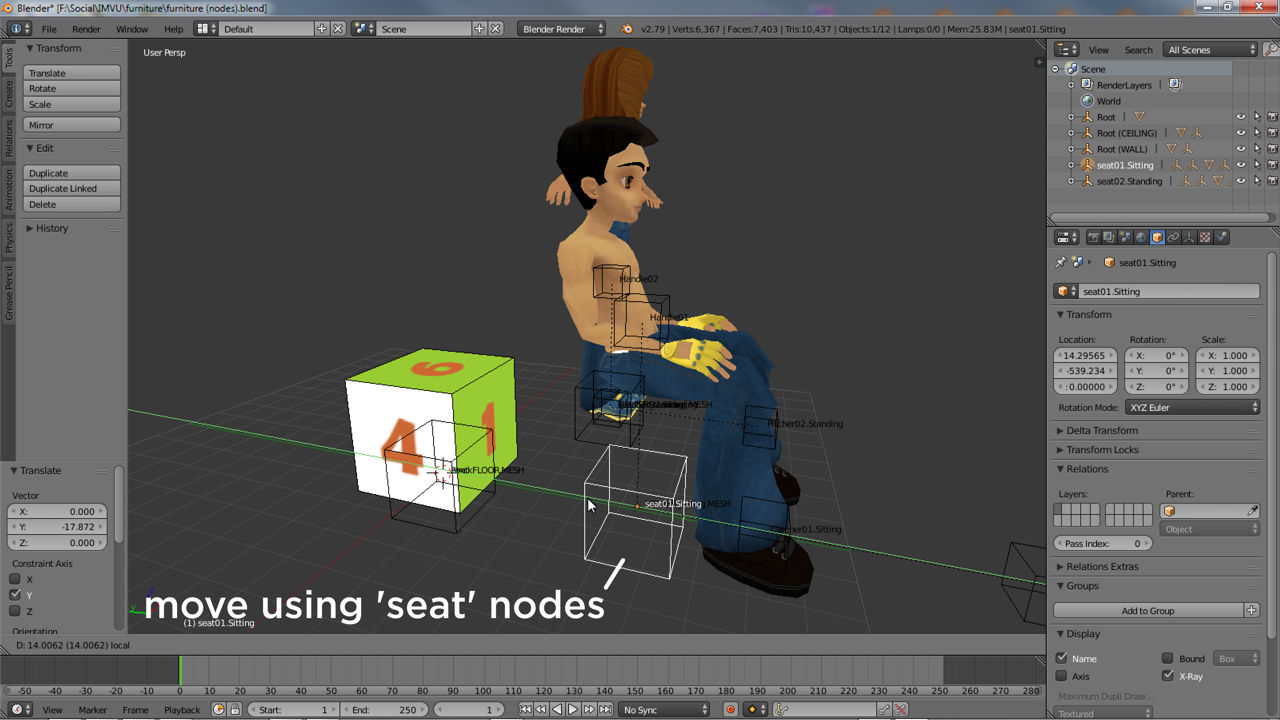 By default the helpers are grouped for ease of manipulation to the large seat node,, seat[n].Sitting/Standing, this should be selected and used to move the group before parenting to the items root node (Root or skeleton.Room). After parenting the seats nodes will need to be selected individually.

Where more than one set of seat or pose spots need to be added or included select the entire group, the helper mesh and seat, handle, catcher and pitcher nodes, and duplicate using Object » Duplicate Objects. This creates a new seat set that can positioned as needed.

When duplicating a set Blender assumes the new objects are to be moved immediately so they cling to the mouse. To avoid misplacing them, after duplication right-click to reset the group back to their original position and then move (use the seat node).

To make more sitting or standing spots the helper mesh and accompanying nodes need to be duplicated – select the group, mesh plus nodes, and then duplicate from Object » Duplicate Objects.

Once the avatar helpers have been used to place seating they nodes need to be properly linked to the items skeleton to ensure they export correctly. For rooms all seat nodes need to be parented to skeleton.Room, for furniture items the same nodes should be parented to Root. To do this, first select the seat nodes as a group, that’s seat[n].*, Handle[n], Catcher[n]* and Pitcher[n].*, then select skeleton.Room or Root depending on the product, adding them last to the group before parenting – Object » Parent » Object » Object (Keep Transform).

The avatar mesh is not needed at export so can be hidden, deleted or left unselected. For more help with rooms click here. 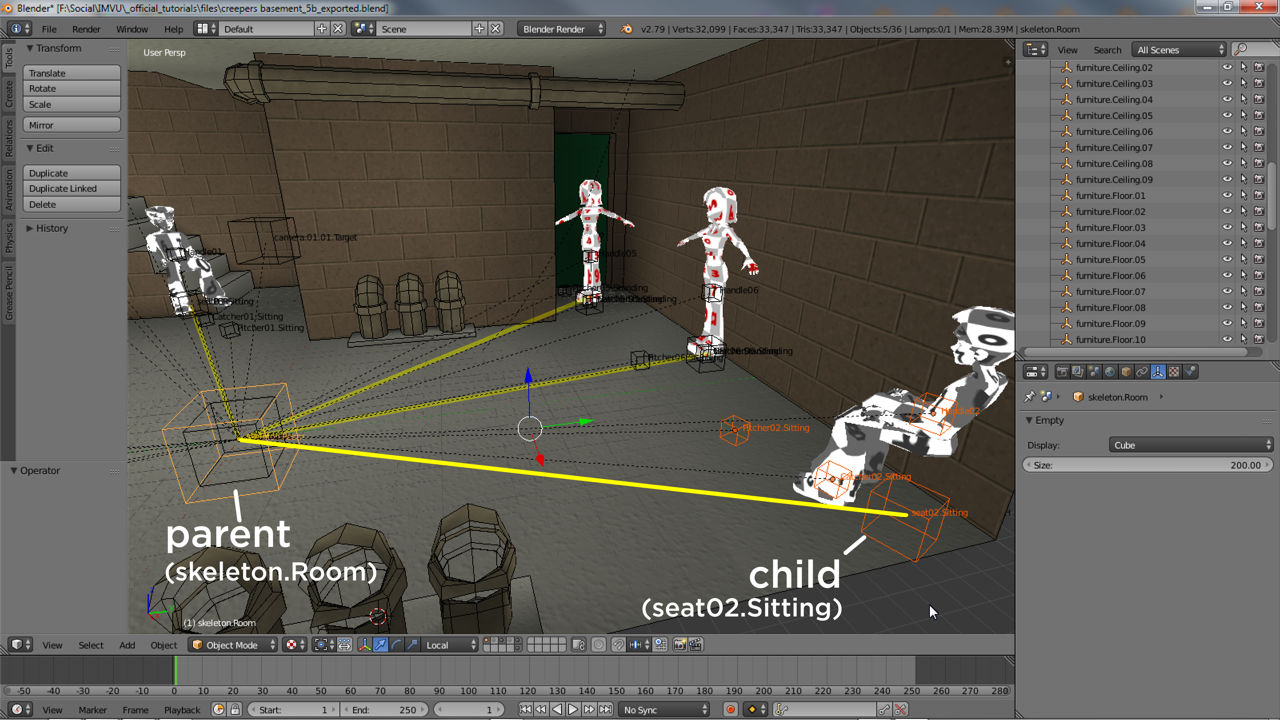 Once seating is positioned the nodes need to be parented to Root for furniture and skeleton.Room for rooms.