Avatar spots, poses spots and seat nodes all refer to the same feature, the places avatars appear when entering or moving around a room. When used they trigger an avatar action, typically an animated sequence or static pose, by default the standard ‘sitting’ or ‘standing’ animations, or with some minor modification custom actions or poses. A room can contain any number of seat sets, usually determined by the rooms size or complexity, but there will always be six as a minimum (allows six avatars into a room).

See here for more information on furniture nodes[link ‘furniture skeleton’], Catcher & Pitcher nodes, and Seat Handles.
For more help adding seats to furniture see here.
IMPORTANT: if there are fewer than six avatar spots, IMVU automatically inserts the missing component/s, often placing them close to skeleton.Room which may position them awkwardly relative to the room or desired usage. Note also, the number of avatars that can use a room at the same time is determined by how many seats the room has, not what might be available through furniture placement. 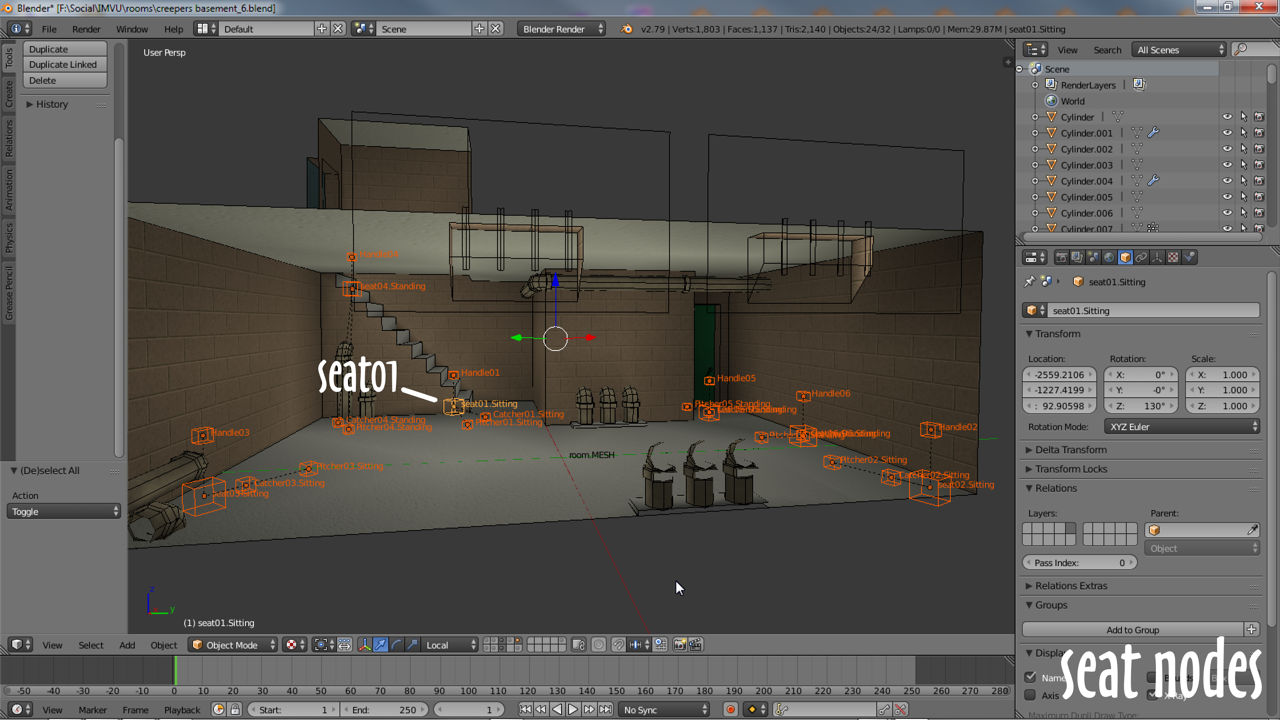 Seat nodes. Creepers basement set up with some seat nodes (only seat nodes shown for clarity). By default they will trigger standard sitting or standing avatar poses but can be used for custom made avatar actions with some minor changes.

Similar to furniture nodes, avatar spots are given specific names or labels to identify their purpose, what they do, and number, how many there are, as follows;

Here [node type] identifies the node relative to the overall room skeleton and seat set so IMVU knows the node is part of the rooms seating rather than being a furniture node; [n] acts as a unique identifier and lets IMVU know how many seats there are; with [type] being used to identify the avatar pose or action triggered. A full set then looks similar to the following;

In these examples [n] is again an incremental number appended to the label identifying the node within a set that increases based on the number of sets – four seats means there are four sets of four nodes (4 x 4);

With [type] referring to whether the seat is a *.Standing, *.Sitting, or *.[custom pose];

IMPORTANT: avatar spots can be parented to animated features, which are in-turn parented to skeleton.Room, a furniture node that races around a track giving the impression of a car being driven for example. 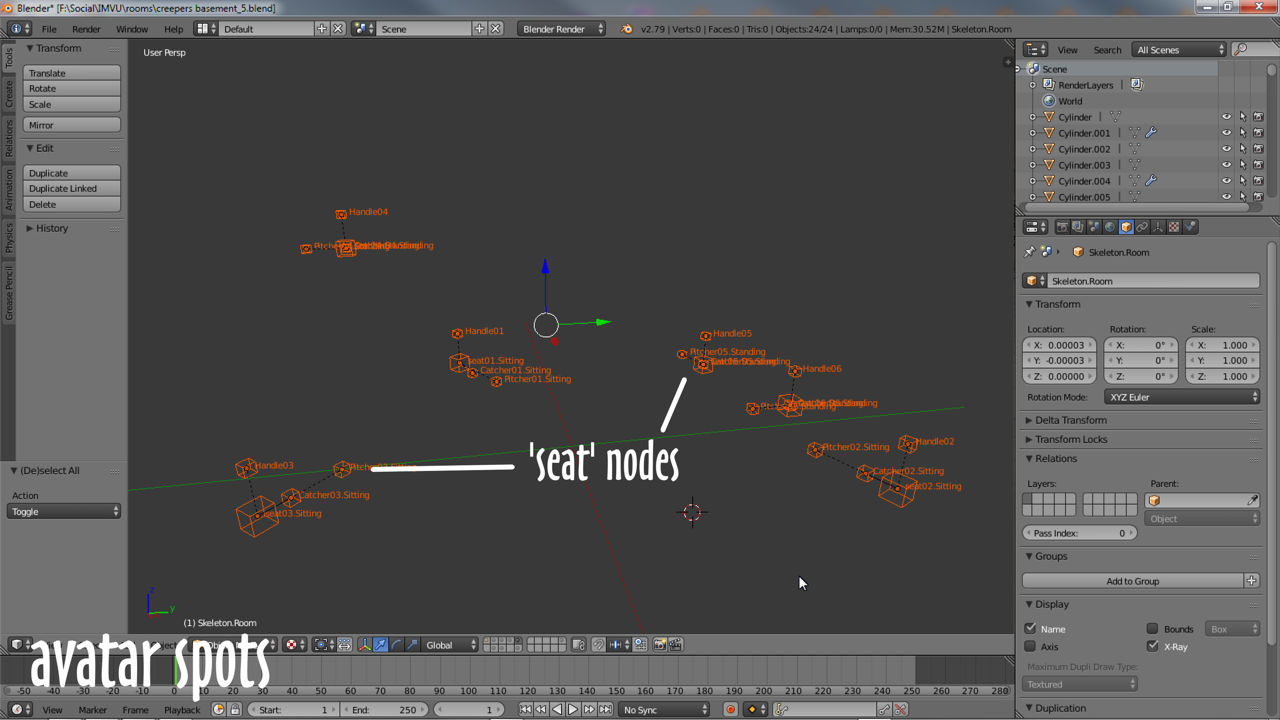 Avatar Spots. Seat nodes or avatar spots are placed around a room in clusters as each spot consists of four node; where the avatar actually appears, the user interface element and an interactive pairing. Each set can trigger a default or custom pose.

Once seating has been positioned, like other room nodes, to work properly in IMVU they all need to be linked to skeleton.Room using Parent. To link nodes together properly first right-click an individual node, or Shift+right-click multiple nodes forming a group selection, then Shift+right-click skeleton.Room adding it to the group. Next click the Object menu and from the available options select Parent »
Object, then Object (Keep Transform) in the Set Parent To pop-up that appears. Everything will be linked together in the correct order and controlled by skeleton.Room.

IMPORTANT: when selecting nodes to Parent, first select the nodes to be linked to skeleton.Room then add skeleton.Room – skeleton.Room must be selected last to ensure proper relations are established between nodes (same applies to using Armatures and linking bones together). 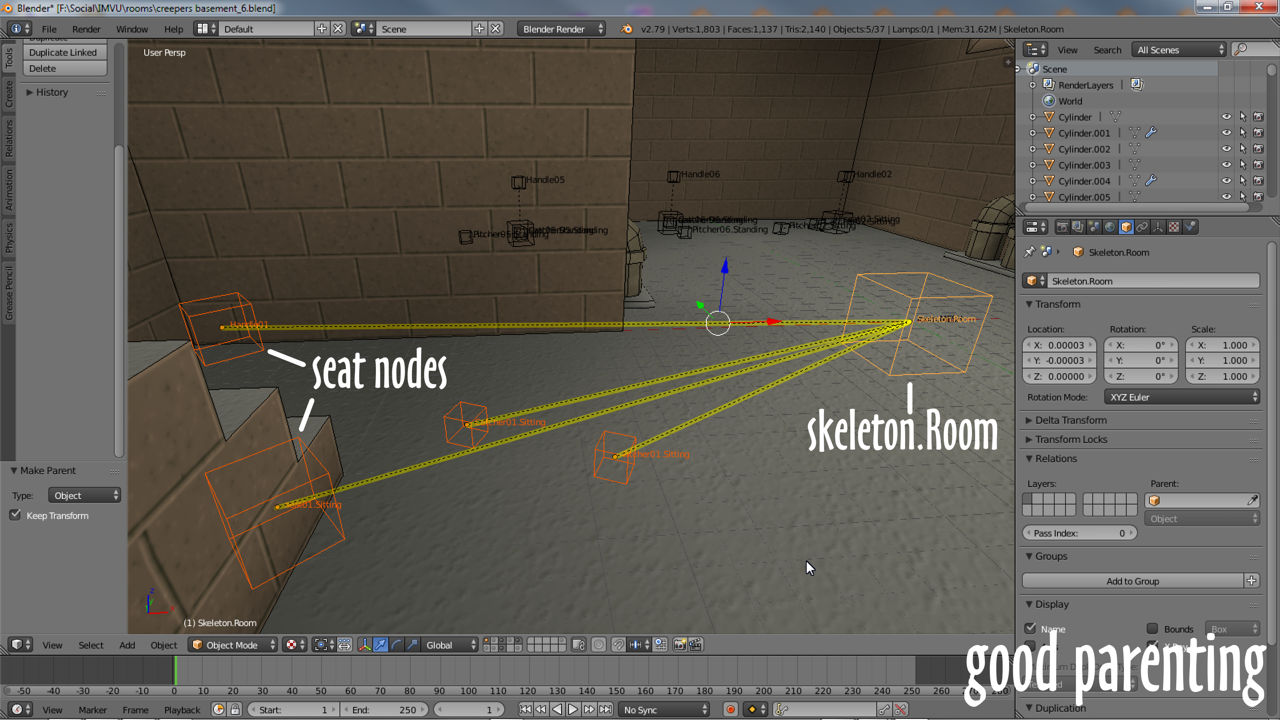