All 3D products in IMVU are comprised of two main parts, a visible mesh and an invisible skeleton. The visible bit, the mesh, is what Users see and interact with. The invisible, the skeleton, essentially controls what happens when items are used. In other words, a furniture items skeleton allows a couch to be placed on a furniture node, part of a rooms skeleton , or an ear-ring accessory being positioned at the avatars ear and not their wrist. Skeletons then are necessary for IMVU to function properly, ensuring items appear and behave as the should.

What Is A Skeleton

For IMVU skeletons are not objects or structures but relationships. So whilst there are actual skeletons, an Armature in Blender, a skeletal structure can be used that’s determined solely by the relationships between objects the skeleton might contain. The aforementioned Armature for example, is a type of skeletal object within which a sub-element, Bones, can be strung together to form what can be considered a traditional skeletal structure; 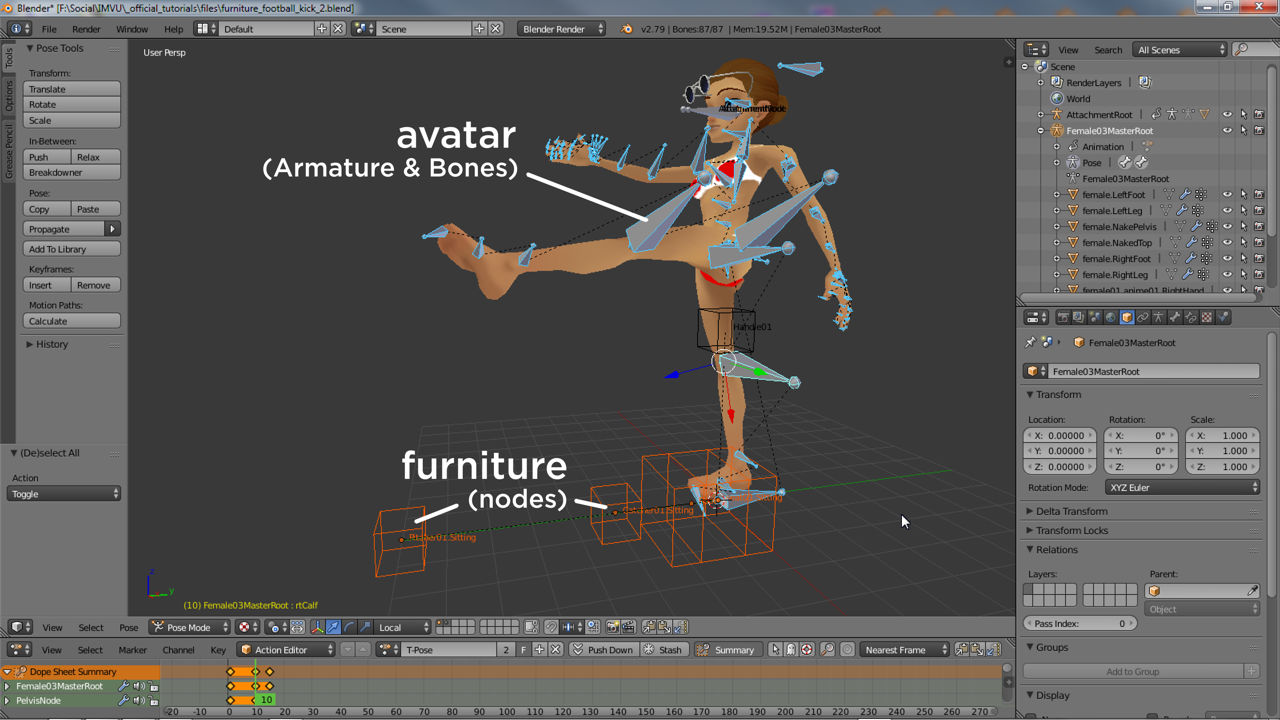 In IMVU a skeleton is simply a hierarchical structure, a set of objects that have a relationship, which generally means they can be constructed from anything (within limits), in Blender and Armature and Bones, Nodes, or a combination of the two.

In contrast, the same skeletal structure, that is the hierarchy represented by the traditional skeleton, can be replicated using any type of object, Nodes as is the case of IMVU, that when linked together create something that approximates the structure of an Armature based skeleton.

It’s important to understand the above discusses structure, the relationships between elements, not behaviour, how those elements might articulate. 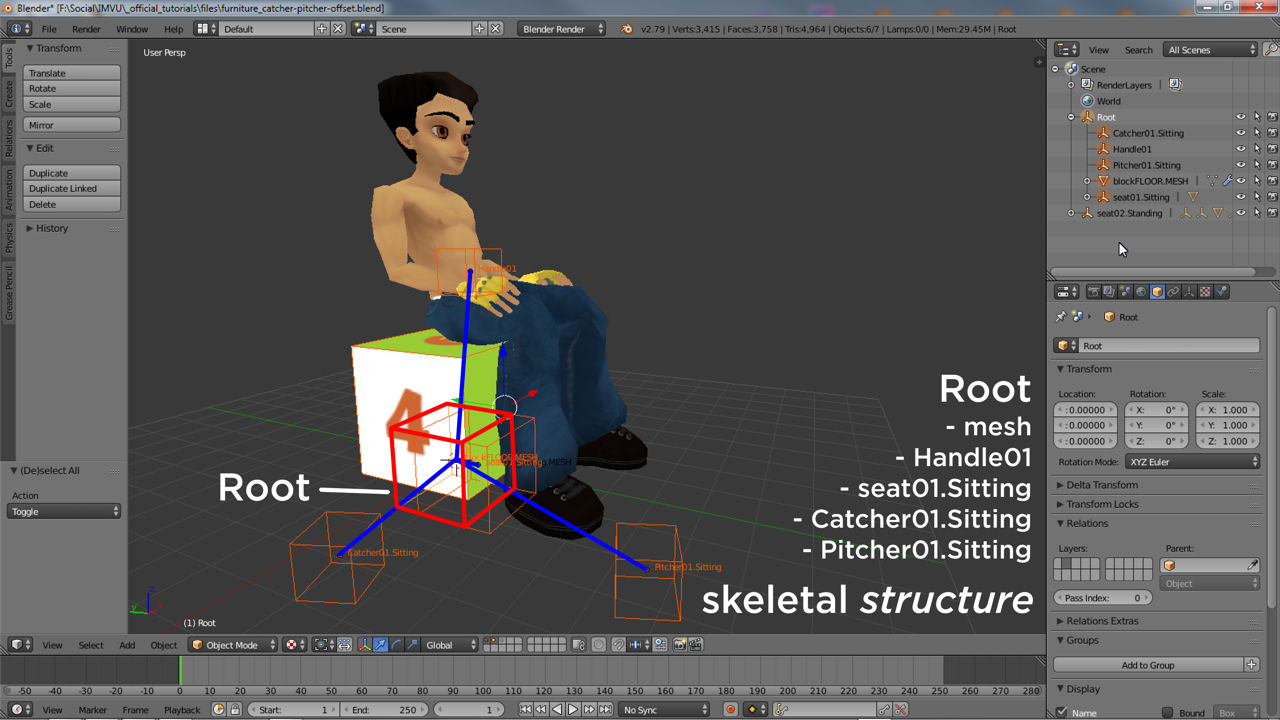 All skeletons are based on the relationship between the elements, not specifically the elements themselves or the object they are made from – using node a skeleton can be made simply by linking nodes together.

For most avatar-based products the skeleton is pre-built, bones cannot be added or removed without negatively affecting the appearance or behaviour of the avatar itself. For all other products and items skeletons can be constructed per the products intended purpose, which in turn determines the skeletons structure, the different types of bones or nodes that can be used (identified by name), how many can be used, their order, orientation, and the hierarchal structure that’s expected. For example, a simple furniture item might have the following skeleton;

The simplest item to make, a non-interactive furniture item, has a skeleton comprising a single node (to which the mesh is parented). 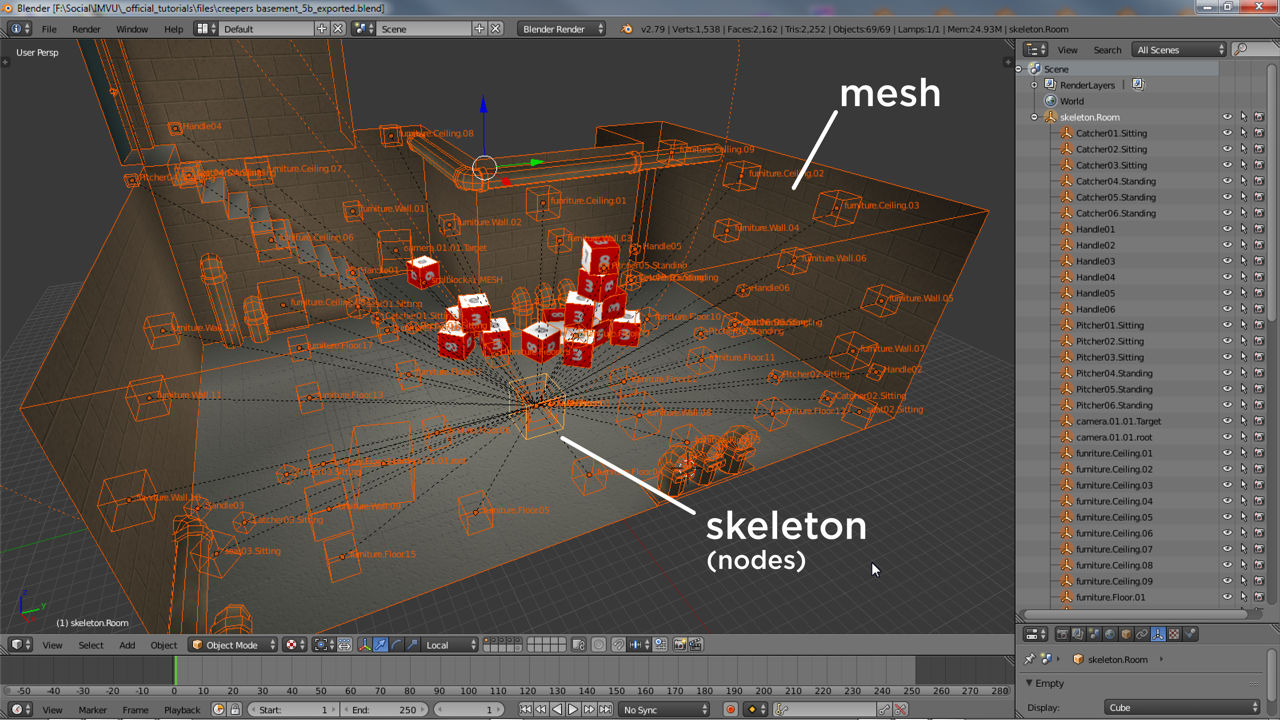 Rooms have skeletons constructed from nodes and although the hierarchical structure is simple, often nodes being linked directly to a master node (skeleton.Room), they can contain a lot of elements because each is a separate object in its own right in Blender.

An accessory (including pets); 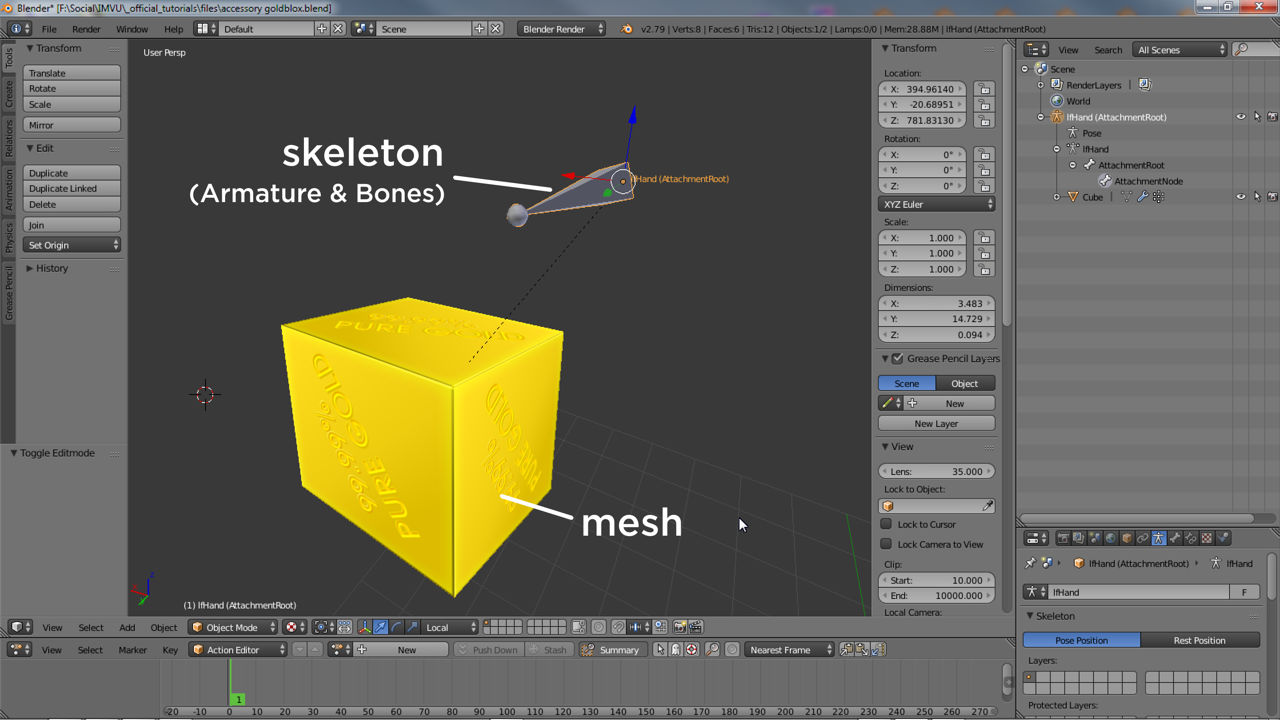 Similar to furniture, accessories (and pets) typically have simple skeletons, the most basic being an Armature object, a self contained hierarchical object in Blender, with two bones.

Compared to the avatar; 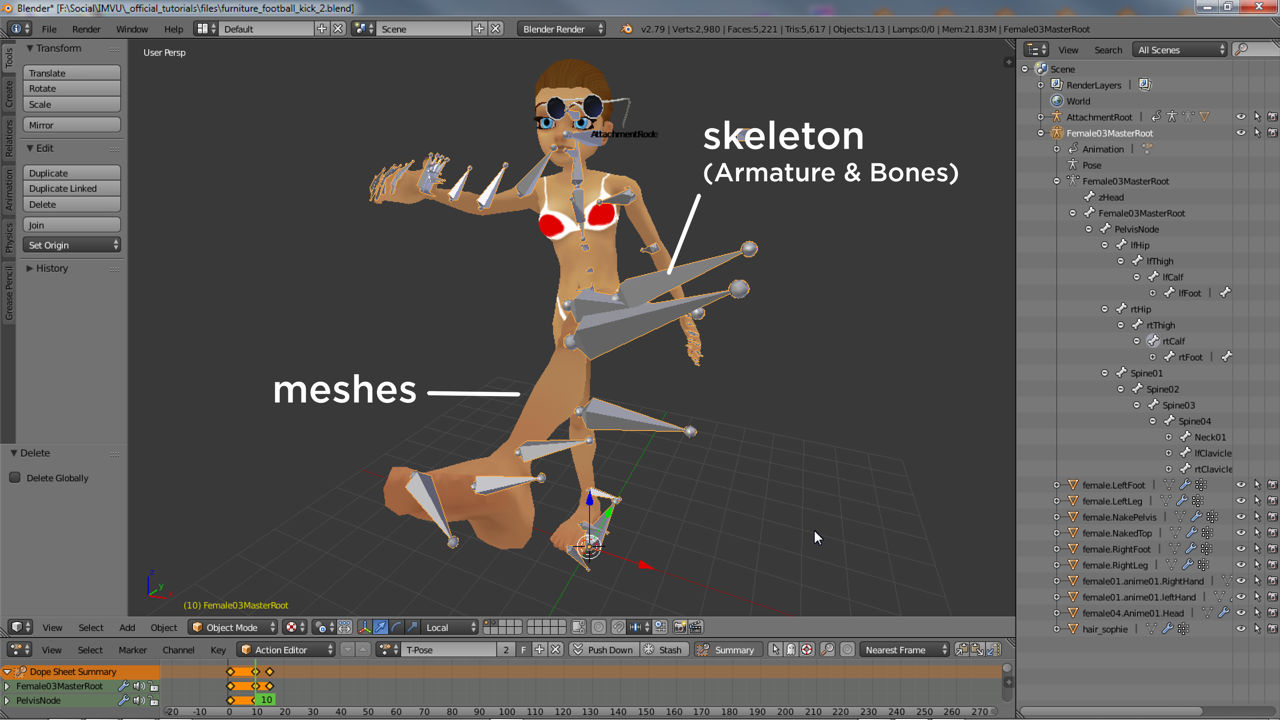 Avatars tend to have the most complex skeletons comprised as they are from an Armature object that contains all the necessary bones to allow for full articulation. Meshes are parented to the Armature and controlled using appropriately named vertex groups.To learn more about avatar skeletons click here.

If a skeleton is represented by an Armature and Bones, additional elements need to be included accordingly, as Bones. Where Nodes have been used here too extra skeletal elements will need to match those already in use, i.e. more Nodes. In Blender creating new elements can be done by duplication, selecting an existing bone or node in Edit Mode and using Armature » Duplicate for bones or Object » Duplicate Object for nodes. In either case a new instance will appear than can be moved, renamed and re-parented based on requirements.

A number of starter files are available for Blender users that include skeletons;
– an avatar version is available for clothing and poses.
– for accessories and pets.
– also for rooms and furniture.


For clothing and poses skeletons should not be changed in terms of the number of bones they contain and/or their relationships to one another [link: clothing – avatar skeleton]. Accessory skeletons can be modified to a limited extent, perhaps to included extra bones to accommodate animation. Rooms and furniture items have the most customisable skeletons whilst also needing to have a number of core elements in place to function in IMVU (which are auto-inserted at run-time if missing). 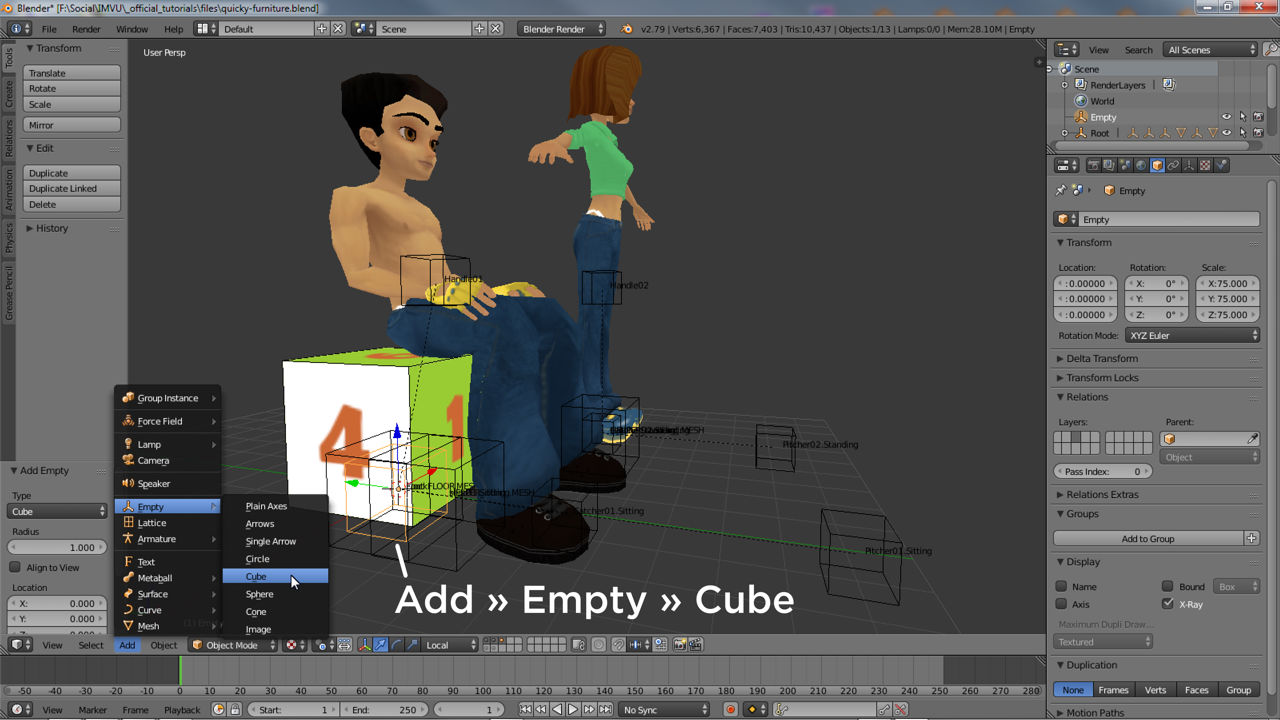 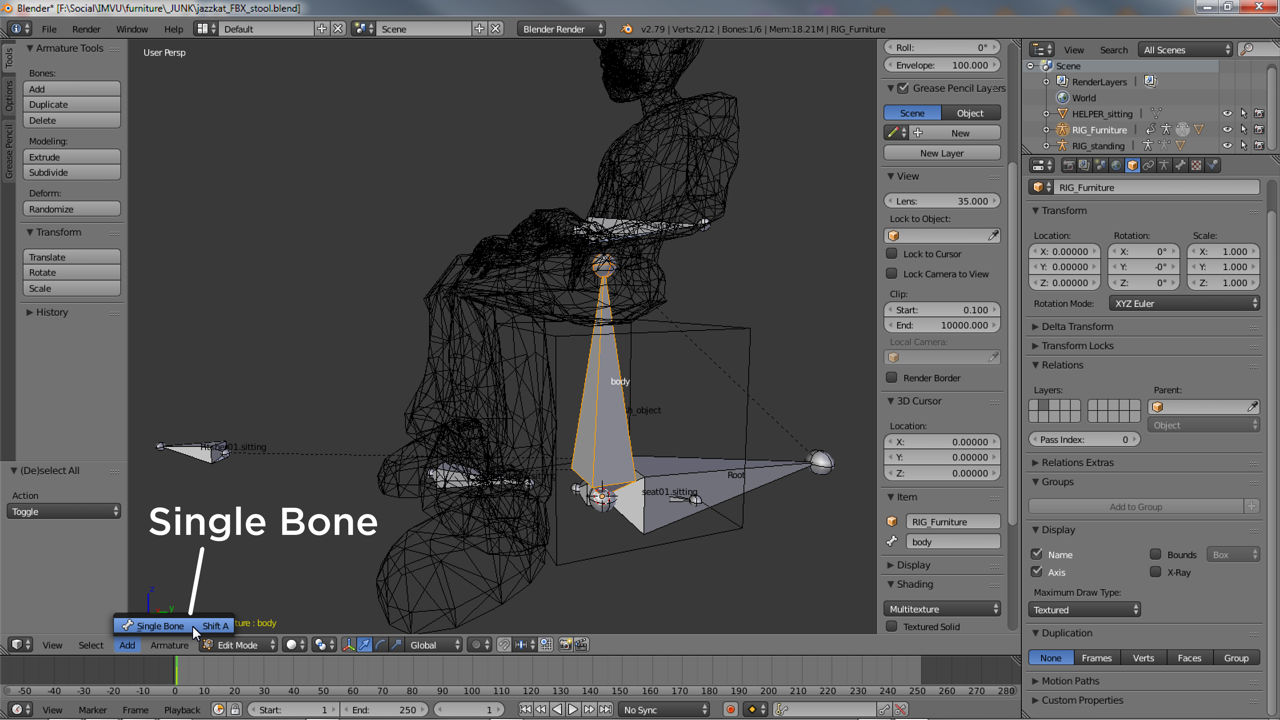 When adding bones or nodes it’s better to duplicate and existing element (select a bone and duplicate from Armature » Duplicate or Armature » Extrude or select a node and click Object » Duplicate) to maintain their size and scale relative to the project – when adding bones or nodes Blender tends to revert to the applications default size and scaling of objects so they may appear extremely small in comparison to those needed for IMVU as provided in the Starter Files.