Making a background texture that covers a long distance and yet does not noticeably repeat is a challenge. There are tricks out there, but some of these techniques lead to other problems that can fight against the effect you are trying to create.

Below is an example of a few tricks that can help make the best of your tiled backdrops without them drawing attention to themselves.

When you are out looking for that perfect image to use as your 3D Room’s background texture, it is best to find something that suggests an environment but does not have any really recognizable features. Having a unique element, or graphic feature, will stand out when the texture is repeating along the background sight lines. The example to the left is pretty good, it suggests “forest” and has a continuous green tone without any attention grabbing features.

If you were to tile this 128×256 texture you would quickly see a hard edge or seam where the texture repeats.

One trick is to make the texture twice as wide… so now 128×512 in size, then flip one of the textures so it meets and repeats the two edges when tiled. This looks better, but one obvious artifact is that the image appears to be mirrored, creating a Rorschach Test effect that tends to draw attention to itself. 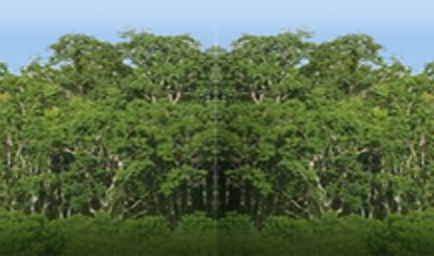 Now we not only have a seam but a mirror image that makes your backdrop appear “fake”, or alien. You can also see that some of the elements that appeared fairly generic in the original texture are noticeably repeating, like the darker open areas and recognizable tree trunk patterns.

Nature is Fractal, and so it does not tend to repeat, but presents a random appearance no matter how similar the rocks, trees or clouds. Our goal is to break up this repeating pattern by sampling from other parts of the texture in a random way. The more random, the better the results.

Using Photoshop’s Clone Stamp Tool we can take samples from other parts of the texture and “stamp” them over the obvious repeating areas.

In the above example I have taken the mirrored texture and used a rough brush shape to grab random areas of the existing texture and stamped them over the more obvious repeating shapes.

To make sure that I do not have the same problem with the other edges, I have also Offset the texture using:

Setting the Offset to Horizontal +256, and the Vertical +0. When I am done editing I can use Offset again to return the texture to its original position. 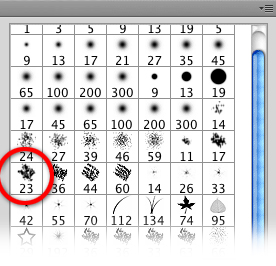 The role of a background texture is to suggest detail in the distance. It is easy to get lost in the desire to make these textures distinctive, but in reality these are “supporting” textures and they really should not be drawing too much attention to themselves. Removing noticeable elements, obvious seams, and repeats will only make your overall Room that much more enjoyable for your customers.