There are a few subtle tricks to making a waterfall texture look more realistic. The ability to scroll a texture along the surface of a mesh is just half of the job, when trying to make your waterfall look like its speed is being effected by gravity.

Another challenge is to suggest the organic nature of the water and have it not look so much like moving wallpaper. This technique is a variation on the Water Texture Effect described in the tutorial of the same name.

The challenge with creating a convincing waterfall is to suggest that the water at the top of the falls is moving slower then the water as it makes its way to its intersection with its destination. This means that the texture will appear shortened at the origin point and elongated at its base.

Unlike the method used in the Water Texture Effect tutorial, we will do our texture distorting within the UVW modifier window. The 3D mesh will need enough extra geometry to allow us to distort the texture while remaining fairly grid-line in the 3D scene.

Then in the process of mapping the texture’s UVW coordinates, we will squash the mapping grid at the base and elongate it at the top. This will have the opposite effect on the model and cause the scrolling texture to move slower at the top and faster at the bottom. Also slightly skewing the horizontal grid will create a more organic movement as the water texture scrolls down the surface of the mesh. 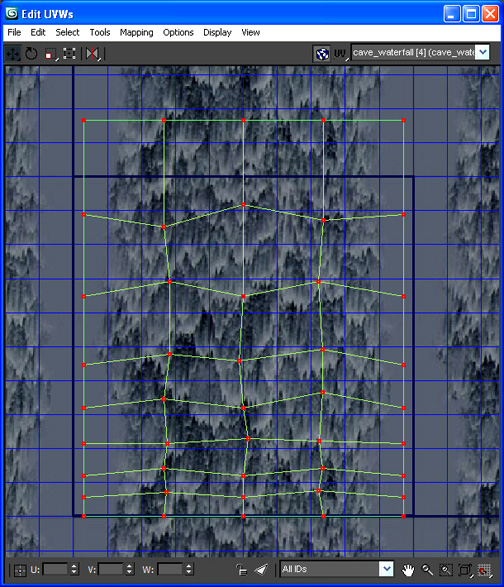 The speed of the texture scrolling is also an important part of creating a realistic waterfall. Take into consideration the size and distance the water is falling and play with the speed until you get something that looks natural to you.

Also, if you are vertex shading your 3D mesh, you can adjust the color and tint of the waterfall as it falls. In the above example I have painted a “shadow” tint at the top of the waterfall to suggest that the origin is up in the shadows near the cave ceiling and gets lighter as it enters the Room. 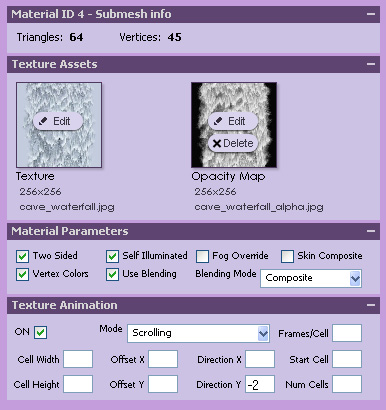 For that final touch, it is nice to add a little bit of Particle splash to the base of your waterfall.

Currently, IMVU has a few pre-made particle effects that you can purchase as furniture items to place in your own scenes.

Soon the IMVU Create Mode Editor will have a fully Particle editor to make this an easier process to add Particles to your own products. For now you can use the Waterfall Splash Effect furniture product, and make sure you place with the scale as well as placement to make your waterfall look just right.