Animated water is a frequently used effect in IMVU 3D Rooms and Furniture. There are some subtle tweaks that can be made to how you apply and distort your water texture that will make it look more realistic and better support the overall feeling you are trying to convey.

In the video above you can see that the water texture is moving slowly along the surface and appears to be flowing in a direction away from the waterfall at the far end of the pool.

It is important to ask yourself questions about just where your water is coming from, and how fast it should be flowing to help make it look as realistic as possible.

Using a simple water texture and a middle-gray opacity map I can create the sense of movement by distorting the mesh AFTER I have applied the texture to the surface I intend to represent the surface of the pool.

Doing this removes the appearance of the water looking like a transparent carpet and suggests organic movement on the surface. 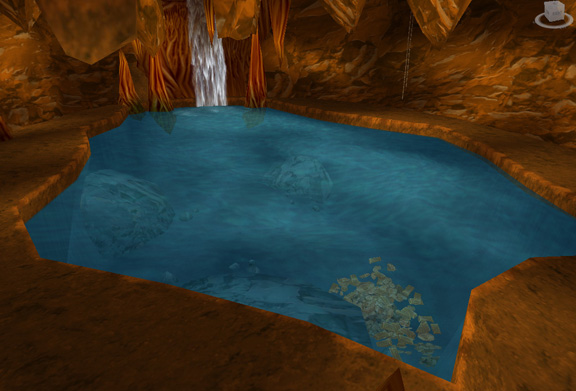 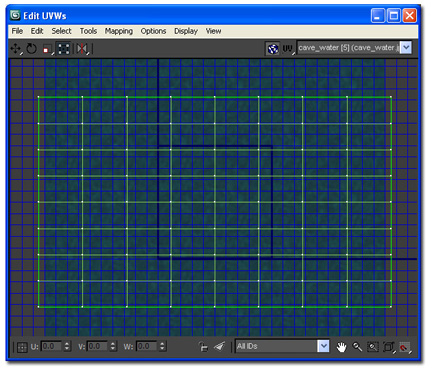 When I apply the water texture to the geometry I make sure to give myself enough complexity that I can distort the mesh later. Here you can see the water tiled over the geometric grid of the water mesh in my model.

Note that I have made no changes to the how the water texture is mapped to the mesh grid. 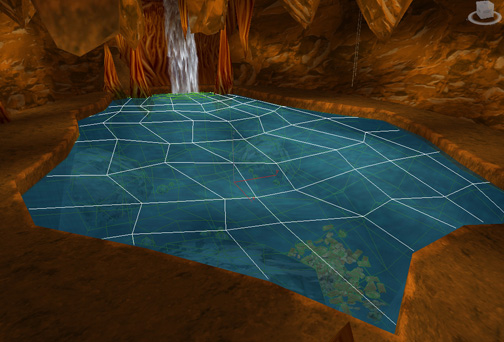 Back in the model I distort the textured mesh along the X and Y coordinates to squash and stretch the texture as it moves away from the source… the water fall. I also shorten the mesh so that the grid is tighter at the base of the waterfall and stretches longer the further it gets from the origin point. W

hen animated this will give the illusion that the water is moving faster near the falls and slower the further it moves away from it. As the texture animates it will appear to “flow” as it distorts from one part of the mesh to the other.

Always keep in mind the speed the water can realistically travel. I have seen a lot of small pools and hot tubs with scrolling water animations that appear to be propelled by a hurricane. When in doubt it is always better to go slower then faster.

In this example the Scrolling animation is set to -0.04 which will insure that the water is moving slowing and away from the waterfall.

Have fun playing with your own variations and settings. 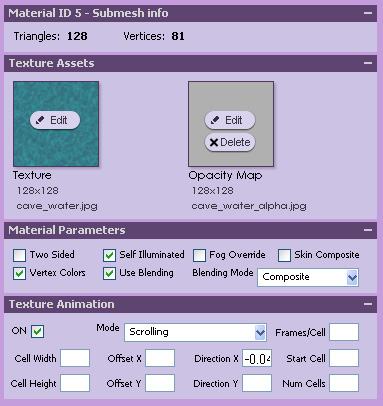